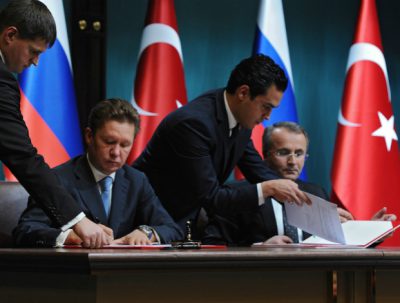 Turkish Stream still in the cards

MOSCOW, June 28, 2016 – The thaw in relations between Turkey and Russia might bode well for the Turkish Stream gas pipeline project, Gazprom announced late on Monday. The project was halted in December 2015 after the downing of a Russian plane by Turkey the month before.

On Monday, Turkish media reported that President Recep Tayyip Erdogan had sent a letter to his Russian counterpart, Vladimir Putin, expressing his “regret and sorrow” over the incident, which led to the death of two Russian pilots and put a strain on relations between the two countries.

In commenting on the Turkish overture, Gazprom spokesperson Sergey Kupriyanov said the company was “open for dialogue” on the project, which envisioned a 1,100-km pipeline across the Black Sea. A memorandum of understanding was signed between Gazprom and Turkey’s Petroleum Pipeline Corporation in December 2014. The original plans said the pipeline would have capacity of 63 bcm (2.23 tcf) per year, of which 14 bcm (494 bcf) would be directed towards the Turkish market. The remaining volumes would be transported onwards to Europe.