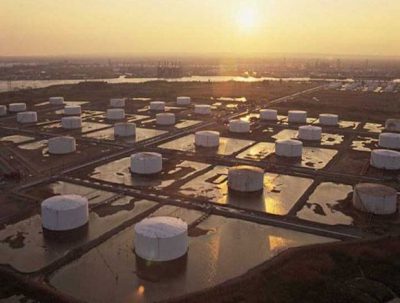 US oil storage tanks filling up

NEW YORK, March 6, 2015 – Crude-oil storage tanks in the US are beginning to fill up, according to The Wall Street Journal.

Total utilisation of crude oil storage capacity in the US stood at around 60 percent as of February 20, 2015, compared to about 48 percent in the same period last year.

In regions where most US crude oil storage facilities are located, such as the South and Midwest, capacity is particularly cramped. Storage in the Gulf Coast, for example, is at an all-time high of 77 percent, which is about 219 million barrels of capacity.

“Capacity is about 67 percent full in Cushing, Oklahoma (the delivery point for west Texas intermediate futures contracts), compared with 50 percent at this point last year,”said the US Energy Information Administration in a statement released on Wednesday.

US inventories have financially benefited from the decrease in oil storage space, posting their largest profit last week in 14 years. Stocks in US crude increased by more than twice as much as expected last week, Reuters reported.