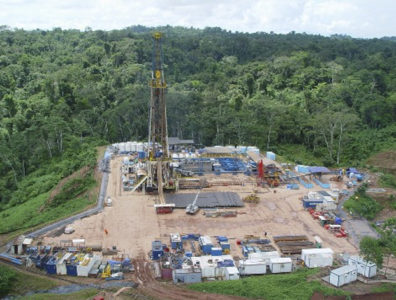 The low fixed price of gas has led some observers to speculate that operators may refrain from declaring new reserves until prices are raised, increasing their profit margins.

Initial investment in the Camisea development was$3.7 billion

10 years of Camisea: The natural gas revolution in Peru

TOGY looks at the story of large-scale hydrocarbons production in Peru following the 10th anniversary of production at the country’s largest gasfield, Camisea. In 2000, oil production had fallen to 100,000 barrels per day and forced the country to become a net importer. While oil output fell, a new industry appeared on the horizon – natural gas.

Peru was the first country in Latin America to become a producer of hydrocarbons, with its first oil well drilled in 1863. After more than a century of intensive drilling and oil production concentrated largely on the north coast and, to a lesser extent, the northern rainforest, Peru’s oil production peaked in 1982 at slightly more than 200,000 barrels of oil per day.

While Peru had previously produced large quantities of oil, natural gas had never been considered desirable, and large reserves remained untapped. In the midst of new economic openness in Peru during the presidency of Alberto Fujimori, with economic instability but also growing free markets and improved business conditions for foreign companies. In this milieu, the government began to take steps to develop the Camisea project.

THE CONSORTIUM: Discovered in 1986 by Shell, exploration of the Camisea region revealed reserves estimated to hold at least 14.6 tcf (385 bcm) of natural gas. An initial consortium of Shell and US company Mobil (now ExxonMobil) first began to develop the field, but backed out in 1998 due to political opposition and a perceived lack of profitability, resulting in a renewed government effort to push for the development of the field.

In May 1999, a Special Commission for Camisea presented a new tender for the various phases of the Camisea project, inviting companies to submit bids for the concessions for production, transport from the fields to the coast, and distribution of the gas in Lima and Callao.

While the distribution concession went to Gas Natural de Lima y Callao, a consortium of Tractebel (99 percent) and Punta Huaca Luna (1 percent). The company has since been renamed Calidda and is now owned by Grupo de Energia de Bogota (60 percent) and Promigas (40 percent).

CONSTRUCTION AND FINANCING: The Camisea Project consisted not only of the gasfields, where production wells were drilled in the San Martín and Cashiriari fields in blocks 88 and 56, but also of the full range of facilities required to transport and process the gas.

These included the gas processing station at Las Malvinas in the Cuzco region, from which gas was transported in two pipelines, one taking gas to Lima, and the other carrying liquids to the Pisco fractioning plant and Peru LNG facility for export.

The three stages of the project – upstream, midstream and downstream – were expected to require a combined investment of between $3 billion and $4 billion. For the upstream portion, considerable funding was obtained from the Export-Import Bank of the United States ($210 million) and Citibank Group ($120 million), with further financing received from an array of smaller commercial banks and organisations.

To date, the exploration and development of the Camisea project has cost more than $3.7 billion, including the expansions of the separation plant at Las Malvinas and the fractioning plant in Pisco. The Camisea consortium has announced that over 2015-2016 it intends to invest an additional $500 million in block 88, which will see further exploration and drilling activity as the supply from the block will be wholly dedicated to servicing domestic demand.

PRODUCTION AND EXPANSION: With an initial production of 400 mcf (11.3 mcm) per day of natural gas, Camisea has been in a process of continuous expansion ever since it started operations. At present, the project is producing 45.3 (1.6 bcf) per day, allowing it to supply 95 percent of Peru’s internal demand for gas as well as the export of over 200 bcf (5.66 bcm) of LNG to Mexico from the Peru LNG facility.

The TgP pipeline, with an initial capacity of around 600 mcf (17 mcm), was likewise expanded to hold 920 mcf (26 mcm) between 2012 and 2015. The pipeline has suffered from series of problems, with several ruptures occurring shortly after operations began, and an attack from Shining Path guerrillas in 2012.

Having celebrated the 10th anniversary of the arrival of Camisea’s gas in Lima in August 2014, the Camisea Consortium continues to look forward to the future, with large-scale plans for developing the field.

In 2014, more than 200 square kilometres of seismic exploration were conducted and the first exploratory well was drilled in the Kimaro field. A total of $500 million will be invested through 2016 on increasing production in the field.

Production at block 88 has been dedicated solely to domestic demand since the beginning of August 2014, but with new production at block 56, as well as at adjacent blocks 57 and 58 owned by Repsol and China National Petroleum Corporation, respectively, production is anticipated to be more than sufficient to supply domestic demand and have ample gas left over for liquefaction and export.

With the concession and construction of the Southern Peru Gas Pipeline, the Camisea Consortium will by 2018 have two pipelines through which to transport gas, giving them a new incentive to produce more gas. One hindrance may be the low fixed price of gas, which has led some observers to speculate that operators may refrain from declaring new reserves until prices are raised, increasing their profit margins.

While the exact price that it will be sold for remains unclear, it is evident that Camisea will continue to provide Peru with a robust stock of gas in the decade to come.