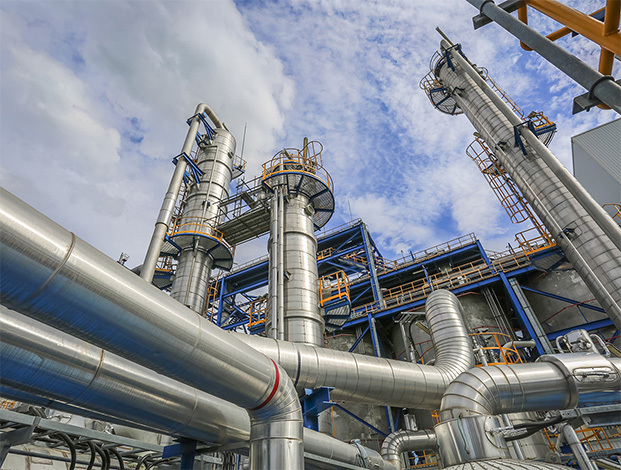 Kuwait’s new refining capacity will transform it into an important hub for the export of low-sulphur fuel.

Kuwait has invested heavily in its downstream sector to respond to rising demand for fuel and petroleum products. Despite market jolts, the multi-billion-dollar Al Zour Refinery is almost complete, promising to set a new milestone in Kuwait’s oil and gas quest.

As the downstream sector gains importance in Middle East markets, many markets have competed to lure investment into mega-projects aiming to enhance refining capacity to fully profit from the substantial crude oil they produce. A number of modern and integrated projects are in the pipeline, namely, the expansion of the Ruwais complex in the UAE, the upgrade of the SASREF refinery in Saudi Arabia and the construction of the Duqm Refinery in Oman.
Likewise, Kuwait is revamping its downstream sector, investing more than USD 25 billion to enhance its refining capacity by 2030. This is evidenced through its Clean Fuels Project, due for commissioning this year. Valued at USD 12 billion, this venture integrates the Mina Al Ahmadi and Mina Abdullah refineries into a sole complex with a nominal capacity of 800,000 bpd.
However, the star project putting Kuwait back on the downstream map is the Al Zour Refinery, one of the largest and most valuable projects in the Middle East. Through it, Kuwait aims to increase its total refining capacity, reaching around 1.42 million bpd, which will transform this small nation into an important hub for the export of low-sulphur fuel and a downstream powerhouse within the region.
“In terms of efficiency and state-of-the-art technology, these refineries are cutting edge. If you look at each individual unit and compare them with any existing projects world-wide, these are the latest and greatest,” Menko Ubbens, senior vice-president and project director of Fluor, told The Energy Year in 2019.

STAR PROJECT: The Al Zour Refinery will rank among the largest refining sites in the world. Located 90 kilometres south of Kuwait City, this grassroots venture will hold a processing capacity of 615,000 bopd of light KEC crude or 535,000 bopd of heavy mix oil, tackling 43% of the country’s refining backlog. Its storage capacity will top an impressive 6.5 million barrels.
Moreover, the facility is designed to process the abundant heavy crude coming from Kuwait’s wealthy reservoirs, transforming it into low-sulphur fuel oil (LSFO 1%) in alignment with Euro 5 standards. To this end, some of its features include six of the world’s most advanced atmospheric residue desulphurisation units, as well as highly efficient semi-regenerative units with a 99.9% recovery rate.
Al Zour is a state-of-the-art facility with efficient infrastructural grounds that incorporate a heat integrated cluster, a hydro-skimming facility, a flare-gas recovery installation and zero-liquid discharge technology. As a result, the plant is expected to produce an array of diverse byproducts such as diesel, jet fuel, kerosene and LPG, in addition to granulated sulphur and naphtha feedstock used for petrochemicals.
Indeed, this new-generation refinery has ambitious prospects. Foremost, Kuwait will make sure it complies with environmental guidelines by reducing sulphur oxide (SOx) and nitrogen oxide (NOx) emissions. But most importantly, it aims to become a hub of high-quality fuel production, exporting it to global markets. In this quest, Kuwait Integrated Petroleum Industries Company (KIPIC), under its slogan “Make More Possible,” will be in charge of operating and managing this facility.
With a value of more than USD 16 billion, Al Zour promises to be Kuwait’s downstream jewel. However, the construction of such a high-calibre project has been complex. Five different EPC packages were rolled out to build this refinery, with the initial construction works beginning at the end of 2017.
In December 2019, installation of the main processing units was completed by a joint venture led by Técnicas Reunidas and including Sinopec Engineering and Hanwha E&C under a contract worth USD 4.1 billion. Similarly, the construction of the diverse support process units, utilities and offsites was assigned in a USD 5.75-billion package to Fluor, leading the FDH joint venture, which also includes Daewoo E&C and Hyundai Heavy Industries.
Here, a modular approach was used to build 188 different modules remotely. These were manufactured in the COOEC-Fluor fabrication yard in Zhuhai, China, to then be gradually shipped to Kuwait, where they were set up. After 24 months of work and 20 shipments, the final 8,600-metric-tonne module was successfully delivered and installed in December 2019. The last two packages, related to Al Zour’s tankage and marine facility, were carried out through similar consortiums led by Saipem and Hyundai E&C, respectively.
Upon completion, KIPIC will be at the head of this masterpiece of engineering, which will hopefully spark a renaissance in Kuwait’s downstream. As of June 2020, the project had surpassed 95% completion, but it is yet unclear whether this year will witness a launch of operations.

MOVING AHEAD: 2020 has both shed light and cast shadows on Al Zour’s final development. KIPIC has embarked on important contracts with Honeywell in the areas of automation and cyber security to enable and secure an effective functioning of the facility once commissioned. Through a five-year contract, the multinational will deploy its Forge for Cybersecurity platform in order to shield Al Zour’s system from potential cyber threats, which have proven to be relentless with facilities of this nature.
In July 2020, KIPIC began operating the gas feed line. Yet Covid-19 has resulted in a major setback in Al Zour’s last stage. Issues of force majeure are lingering among some contractors and services providers, which, added to restrictions and lockdowns, have delayed the project by several months. For example, the commissioning of Al Zour’s 250,000-bpd Phase 1 was due by July, but will be pushed back at least six to seven months.
In addition, the IMO’s new sulphur content regulations, implemented in January 2020, may present another hitch. The new SOx cap for bunker fuel has been lowered from 3.5% to 0.5%, which would make Al Zour’s SOx 1% heavy fuel output noncompliant. An expansion of residual fluid catalytic cracking processing technology could mean a further delay. This is not to mention the major drop in fuel and diesel demand which, if they persist, could lead to overcapacity in this facility.
Despite the challenges, future prospects are promising. The Al Zour Refinery is part of a larger quest. KIPIC has gone a step beyond the concept of a standalone refinery, as it is also building adjacent petrochemicals production facilities and an LNG regasification terminal with a capacity of 3 trillion Btu per day.
By the year 2023, Kuwait expects to have a full-fledged refinery-petrochemicals complex, a building block to further develop the country’s downstream industry, industrial sector and thus much of its in-country value.
“The country has worked hard to materialise integration between the refining sector and petrochemicals. A clear example is the Al Zour refinery complex, that aims to be one of the largest integrated complexes in the world,” Abdulaziz A. Alduaij, chairman of Kuwait Aromatics Company, told The Energy Year in 2019.