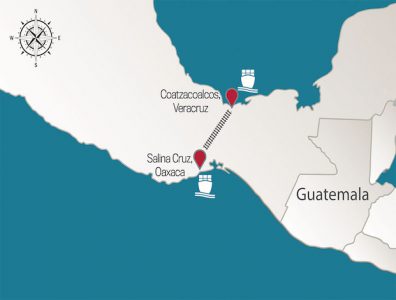 The CIIT’s railway and roads are set to begin operating in 2023, opening up a novel route for global trade

Value of the CIIT: Around USD 12.9 billion

The many stages of Mexico’s Isthmus of Tehuantepec Interoceanic Corridor (CIIT) project are together revitalising southern Mexico’s logistics infrastructure in a bid to support the country’s oil and gas operations, electrify the region and boost international trade. The initiative is one of the government’s flagship developments in modernising the country’s industry.

The CIIT is one of the most ambitious mega-projects launched by President Andrés Manuel López Obrador’s administration and is set to transform trade and logistics in Mexico. Stretching 300 kilometres, the Isthmus of Tehuantepec is the narrowest strip of land connecting the Atlantic Ocean through the Gulf of Mexico to the Pacific Ocean through the Gulf of Tehuantepec via the ports of Coatzacoalcos and Salina Cruz.
Under the plan, the logistics corridor will witness development and rehabilitation of 173 kilometres of road and almost 300 kilometres of rail lines and major port and airport expansions. More than 32 square kilometres of land have been granted to the private sector to build 10 industrial parks and a number of critical energy projects have been planned such as a new ethane import terminal and the 247-kilometre Jáltipan-Salina Cruz gas pipeline.
The CIIT undertaking is valued at around USD 12.9 billion, of which USD 5 billion is expected to come from federal funds and the rest from private investors. The venture is the backbone of the overarching Programa para el Desarrollo del Istmo de Tehuantepec 2020-2024, which aims to address economic and social inequalities in the area of 79 municipalities in the states of Oaxaca and Veracruz.
The CIIT was officially established in June 2019, with the multi-modal national endeavour billed as the “new Panama Canal.” As it stands, its railway and roads are set to begin operating in 2023, opening up a novel route for global trade that will link markets such as Europe and Asia-Pacific and spur trade and industry in Mexico’s south-east region.

PARTS OF A WHOLE: The CIIT project has several dimensions. The golden gates to the corridor are the ports of Coatzacoalcos and Salina Cruz, which are experiencing a deep process of expansion and modernisation. A total of 15 different projects are planned to enhance the capacities of both ports with a combined public investment of USD 468 million.
Works on the Coatzacoalcos port include dredging works to expand the port’s depth to 12 metres and constructing a brand-new 940,000-square-metre container terminal valued at USD 248 million that will move 1.3 million containers by the end of 2023. Adjacent to the port is the Laguna de Pajaritos, which has also seen an expansion of its dock. Works on the Salina Cruz port include the construction of a 1.6-kilometre-long, 23-metre-high breakwater and different dock modules for a multipurpose terminal.
To connect the two maritime assets, rehabilitation work is being done on the 303-kilometre railway that will transport the high-speed Transístmico train line from one side to the other in less than three hours. The Acayuca-La Ventosa highway is also being modernised with the aim of making transportation of goods by road more efficient.
While progress is being made on a logistics front, the most challenging task will be effectively establishing the 10 different industrial parks along the isthmus. The government has set in place a series of incentivising conditions to lure private investors to these zones, such as lowering VAT from 16% to 8% and income tax from 30% to 20%. An array of local and international entities has already shown interest, including the European Investment Bank.

REGIONAL ENERGY HUB: Equally important is the weight this project has in terms of expanding Mexico’s energy potential. The isthmus is home to diverse networks of production, transportation and consumption of fossil fuels. Its northern gates open up to the most prolific hydrocarbon sites in the country in Veracruz, Tabasco and Campeche, which combined produce more than 80% of Mexico’s crude and 50% of its gas. The CIIT project will therefore enhance the flow of fuels between the Gulf of Mexico to the Pacific Basin.
In this quest, the expansion of gas pipelines has been a priority, such as the Federal Electricity Comission’s (CFE’s) USD 435-million Jáltipan-Salina Cruz line. In addition, the rerouting of the Guaymas-El Oro pipeline was recently established by CFE and Sempra Infrastructure as part of their joint efforts to feed the region with natural gas. Aligned with this strategy is the construction of a USD 1.18-billion LNG export terminal in Salina Cruz, with an initial liquefaction capacity of 5.66 mcm (200 mcf) per day with the option to expand capacity to 11.3 mcm (400 mcf) per day.
The region is also known for its robust petrochemicals sector. Brazilian petrochemicals entity Braskem Idesa has committed to building a USD 400-million ethane import terminal called the Terminal Química Puerto México around Laguna de Pajaritos.
In terms of electricity, this region holds a large share of Mexico’s installed wind capacity, with 28 operating wind parks and another 10 in different levels of development. Additionally, it houses a combined-cycle power plant and 19 thermal plants that furnish the corridor with 1,356 MW. The government is now supporting various power transmission projects, such as the construction of 500-kV high-voltage transmission lines connecting the southern part of the isthmus with the centre of México.