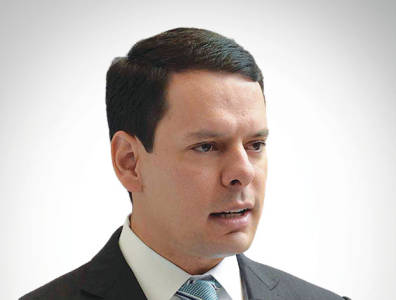 We need new structures that can use cutting-edge technology, allowing us to use cheaper and more environmentally friendly fuels.

Jaime Hernández Martínez, general director of the Federal Electricity Commission (CFE), talks to TOGY about the many changes the CFE is undergoing due to both Mexico’s energy reform and internal processes. He also discusses developments in the power sector as the market opens to private players.

Established in 1937, the CFE is one of Mexico’s productive state enterprises. The company and its subsidiaries generate, distribute and market electric power. The CFE’s transmission network spans more than 100,000 kilometres and its distribution network extends more than 800,000 kilometres. In addition, the company owns 186 power generation plants.

On company needs: “Regarding generation, we have to be able to attract private capital to have the ability to renew our generation plant portfolio and to start associating with the private sector to look for new generation plant opportunities. We need new structures that can use cutting-edge technology, allowing us to use cheaper and more environmentally friendly fuels.”

On progress made: “By working on different fronts – strengthening operational and commercial strategies, strengthening finances, renovating our asset portfolio, especially regarding generation plants – we have been able to face the medium term from a position of relative strength within Mexico’s new electrical market, contributing to higher-quality electrical service at competitive prices and using progressively more and more environmentally friendly processes.”

Most TOGY interviews are published exclusively on our business intelligence platform TOGYiN, but you can find the full interview with Jaime Hernández Martínez below.

What has been the CFE’s power generation strategy following the energy reform and the internal changes the company is undergoing?
Regarding generation, we have to be able to attract private capital to have the ability to renew our generation plant portfolio and start associating with the private sector to look for new generation plant opportunities. We need new structures that can use cutting-edge technology, allowing us to use cheaper and more environmentally friendly fuels.
Based on this idea, in 2015 we put in motion a very ambitious strategy to strengthen the national gas pipeline network, and aimed at gradually transforming the electrical plants across the country to use natural gas.

What opportunities has the liberalisation of the fuel market provided the CFE?
The energy reform enabled the CFE to participate openly in the fuel market for the first time. To achieve this, we founded two new companies, one in Mexico and one in the United States: CFE Energy and CFE International, respectively. These companies are aimed firstly at optimising the fuel supply that the CFE needs to generate electrical energy. In time, these two companies will also be able to create business opportunities with third parties.
Both of these companies are already participating as independent players in the new electrical market. In the first few months that the companies have been operating, we have been able to see the first considerable savings. Around 80% of the production cost for the generation of electrical energy comes from the cost of the fuels involved in the generation process.

What key steps has the CFE taken to generate more power with natural gas?
For this to be possible, it was necessary to strengthen the network, which for a long time had been in a relatively static state with no growth. This is why we are betting on the construction of 25 new gas pipelines, which will enable us to expand the national network by approximately 75%, with an investment of nearly USD 13 billion. Of these, several are already operating, five of which entered operation in 2017. Others will become operational in 2018 and 2019.
Construction on a subsea pipeline from Texas to Tuxpan was started in May 2017. That pipeline will strengthen, to a very significant extent, Mexico’s current capacity in terms of natural gas implementation.

What have been the main initiatives taken by the CFE to strengthen transmission and distribution capacity?
We want to start implementing new technologies and having intelligent networks, and we want to reduce energy losses. Internally, these losses are divided into two groups: technical and non-technical losses. In 2016, we had an average loss of around 12%. In 2012, we had losses of around 16%.
The challenge was particularly significant when the CFE took over operational control of the central zone of the country in 2009. Since then, we have had to make large investments and a considerable logistics effort to achieve a reduction of losses by 1% per year. One important thing to highlight is that 2016 was the first year in several years where we had losses that were lower than those registered before the CFE took operational control of the country’s central zone.
We have to keep moving forward with the agenda of loss reduction. Our objective is to reach a loss level of around 10-11% in 2018, which we believe we can achieve with almost no problem.

What do clean energy development, commercialisation and distribution projects mean for the future of Mexico’s power generation sector?
These projects reaffirm the CFE’s commitment to the environment, and they also reveal the huge changes we have seen regarding technology prices, especially for wind and photovoltaic energy generation. In October 2016, the International Energy Agency published a report which stated that in the next five years, there will be an additional five wind turbines and 30,000 solar panels installed around the world each hour. Mexico wants to be part of this transformation, and the CFE wants to contribute to this effort, aiming to achieve the country’s objective of having 35% of power generated from clean energy sources by 2024. Today, that level is around 20%. Around 75% of that is a direct result of the CFE’s contribution.

What tools has the energy reform provided the CFE to strengthen its finances?
It is important to note that before the reform was implemented, we paid taxes following a scheme we called exploitation. This scheme became useless in the new competitive context, so the reform decided to eliminate it. Because of this, the CFE had to start paying taxes as a normal company, which pays taxes when it has profits and does not pay them when it has losses.
Another important element was the electrical price subsidy granted by the federal government to final energy consumers in Mexico. Today, thanks to the reform, we have a much more transparent mechanism, in which the federal government assigns a specific amount of its yearly budget to the payment of these subsidies. This measure not only benefits the general population, but also contributes to strengthening the CFE’s finances. In May 2016, we concluded a very significant negotiation that enabled us to reduce the company’s labour liability by around 54%, following an agreement with our employees and the company’s union.
The energy reform established a very important incentive: For each peso saved by the administration following an agreement with the employees, the federal government would provide an additional peso to capitalise, only aimed at paying the pension of those workers in the future.
Together with the help of incentives from the federal government, the CFE was able to reduce labour liability by MXN 320 billion [USD 15.4 billion]. This is one of the most significant measures regarding financial strengthening.

What is the CFE’s debt situation?
The CFE was having a relatively accelerated rhythm of debt. In each year since 2014, we have had lower net debt than the year before. The last weak link was the exchange rate. We have experienced a relatively long period of exchange volatility.
In 2002, 100% of the CFE’s debts were in foreign exchange, mainly in US dollars. We were able to close 2016 with a foreign exchange debt, which was 30% of the CFE’s total debt. Our aim is to have foreign exchange debt in the range of 20-30%, but thanks to the efforts we have made so far, we are already starting to see the impact of the containment of the effects of exchange rate fluctuations.
The combination of controlling our operational costs, reducing labour liability, implementing a more transparent subsidy mechanism and containing company wage expenses enabled us to have a positive result in 2016. However, this is not a moment to celebrate, because we will have to persevere with enormous determination in the next few months and years. It will still be very challenging for the company to achieve a sustainable equilibrium following its 2021 business plan.
By working on different fronts – strengthening operational and commercial strategies, strengthening finances, renovating our asset portfolio, especially regarding generation plants – we have been able to face the medium term from a position of relative strength within Mexico’s new electrical market, contributing to higher-quality electrical service at competitive prices and using progressively more and more environmentally friendly processes.

What role does natural gas play in Mexico’s power generation?
The CFE and the country in general have to assure that they have a relatively robust mix of fuel sources, so that we can react at the appropriate time when faced with changes in the relative prices of gas, petrol and diesel. Considering current prices, gas is still a very competitive option, as it is around 40-50% cheaper than petrol or diesel, and far less polluting.
Since 2013, the CFE’s carbon dioxide emissions have been reduced by around 44%. We are committed to achieving a total reduction of 99% by 2022. Betting on cleaner fuels is important not only from a financial point of view, but also from a social responsibility one.
We have also bet on clean energy sources following the medium-term clean energy tenders. Today, we still face a great challenge when considering energy storage, which is why it will be very important that users we might supply through clean energy sources also have more stable backup sources, such as those based on traditional sources and technologies, especially combined cycles. We cannot close ourselves to different alternatives. It is important to diversify and keep an open mind, if the company needs to react quickly to benefit its clients in the medium term.

What is the significance of entering co-operation agreements with technology providers to further optimise processes?
The reform has given us the big opportunity to create long-term alliances with the private sector. That is something we want to capitalise on in the very short term. This possibility enables us to share the risks and benefits of all our operational activities.
An agreement with a company such as Siemens is very important, as that is a company that has been a strategic ally of the CFE for a very long time. The company has been very close, not only with the CFE, but with Mexico in general. That is why, for us and given the context of the market opening, the 2017 agreement with Siemens came naturally.
These types of alliances will surely enable us to more quickly modernise our asset generation portfolio which consists of 187 power plants – 157 that we own and 30 that are external energy producers – and strengthen the maintenance of our transmission and distribution networks throughout the country, which is essential to ensuring the distribution of all additional generated energy resulting from the tenders. In Mexico, electrical power demand grows every year, which is not the case in other countries that have implemented energy reforms such as ours. On average, we have annual power generation growth of 3.5%. In 2016, Mexico generated 319.364 terawatt hours of electricity, 64.868 terawatt hours of which were from renewable energies. This enables us to strengthen the CFE’s future generation capacity and create new opportunities for the increasing participation of the private sector in the electrical market. In some fields, we will compete, while in others we will work as partners, always keeping in mind the benefit of Mexico’s electrical sector clients.

For more information on the Federal Electricity Commission in Mexico, including the company’s restructuring and pipeline auctions, see our business intelligence platform, TOGYiN.
TOGYiN features profiles on companies and institutions active in Mexico’s oil and gas industry, and provides access to all our coverage and content, including our interviews with key players and industry leaders.
TOGY’s teams enjoy unparalleled boardroom access in 35 markets worldwide. TOGYiN members benefit from full access to that network, where they can directly connect with thousands of their peers.