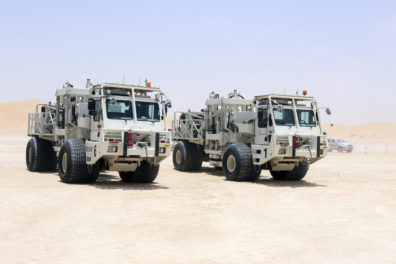 In May 2014, Austria-based multinational oil and gas company OMV, together with its partner, Germany’s Wintershall, spudded Shuweihat-5, the first appraisal well at the sour gas and condensate field, Shuweihat.

Located around 25 kilometres to the west of Ruwais in the western region of Abu Dhabi, the field is to host up to three wells and a 3D seismic campaign as a part of its appraisal, with the Abu Dhabi National Oil Company (ADNOC) to participate in development and production.

OMV’s expectations for the hydrogen sulphide content of sour gas produced at the Shuweihat field are around 20 percent.

“Development of these fields, as well as the progress being made at Bab and Shah, is expected to yield gas production increases, which can considerably contribute to Abu Dhabi meeting its 2020 gas production target of 375 mcm (13.2 bcf) per day,” he added.

OMV secured its first upstream position in Abu Dhabi in June 2012 for the Shuweihat field, as part of a technical evaluation agreement together with ADNOC and Wintershall, with the latter company acting as operator.

SEISMIC PROGRESS: OMV began seismic acquisition in the eastern region of Abu Dhabi in June 2014, as a part of an exploration contract signed with the national oil company in the same month a year earlier.

Making Austria the second country to enter Abu Dhabi’s exploration scene since 1967, the four-year programme consists of seismic acquisition and the drilling of exploration wells. If successful, ADNOC and OMV intend to jointly develop the discoveries.

OMV will shoot a 3D seismic survey, as well as acquiring 2D seismic lines, before combining the two surveys for evaluation. UK-headquartered seismic acquisition company WesternGeco, a subsidiary of US oilfield services giant Schlumberger, has been contracted to carry out the surveys.

Abu Dhabi’s state-owned International Petroleum Investment Company has been an OMV shareholder since 1994 and holds a 24.9-percent stake in the group. OMV first opened an office in the emirate in 2007.