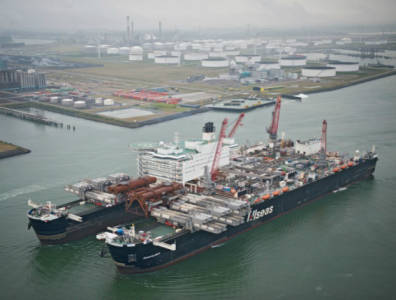 Last Tuesday, mooring technology and equipment services company InterMoor announced the completion of one of the largest suction piles ever manufactured. To be installed in the Gulf of Mexico, the pile measures close to 17 metres in length and has a diameter of almost 10 metres, double that of regular piles.

The piles act as deep mooring anchors and are a crucial element of so-called deep foundations for deepwater projects. Due to their weight and open bottom, piles are largely self penetrating. For them to become fully anchored, an ROV is deployed to pump the water out of the top part of the cylinder.

According to InterMoor, size wasn’t the only challenge. Weight was also an issue, the company said on its website. “With a 32’ diameter pile, the big challenge is component mass. At that size, individual pieces will collapse or deform under their own weight. Because of this, every component had to be engineered to be handled, so that it could be assembled without bending.”

The Monster Pile, as the Louisiana manufacturing crew came to call it, is a potent reminder of all that is big and beautiful in oil and gas, such as the famous Bullwinkle jacket. Also underwater, the frame stands close to 500 metres tall. On land, there are but a handful of structures that dwarf it. Bullwinkle was installed by Shell in the Gulf of Mexico in 1988. At 50,000 tonnes, it is estimated that one could manufacture 10 Eiffel Towers from its steel.

No small wonder, then, that in December 2016, Gazprom’s South Stream Transport division called upon Allseas to install the offshore section of the TurkStream gas pipeline. This job calls for the laying of almost 75,000 sections of 32-inch pipe at a depth of more than 2 kilometres over a distance of more than 900 kilometres.

Despite its name, Pioneering Spirit wasn’t the first vessel capable of moving rigs. Semi-submersible heavy-lift ships have been around for some time. Less versatile, the Dockwise Vanguard’s 19,250-square-metre deck can carry loads of up to 110,000 tonnes. In 2015, it moved Eni’s FPSO unit Goliat.