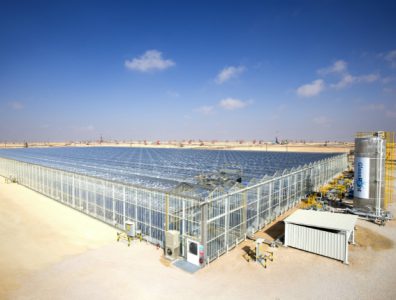 In May 2013, US company GlassPoint announced that the solar enhanced oil recovery (EOR) project at the Amal West oilfield in southern Oman was fully operational. The pilot project uses a number of aluminium mirrors suspended from a glass roof to reflect sunlight onto water pipes below. This heat then turns the water to steam, which is used in EOR techniques in the oilfield.

The operator of the Amal West field, majority state-owned company Petroleum Development Oman, awarded the project to GlassPoint in August 2011. Construction began in January 2012 and was completed in December 2012. As the project is a pilot scheme, the cost has not yet been disclosed.

UNDER A GLASS ROOF: The mirrors and pipes at Amal West are covered by a glass roof, which protects the equipment from sandstorms. This protection allows for the mirrors to be made from cheaper, more lightweight material compared with normal solar panels. Additionally, whereas regular, outdoor solar panels require individual cleaning, the roof over GlassPoint’s mirrors guards them from dirt and dust. Each night the roof is cleaned using water that is then recycled. The cleaning system has an estimated 90-percent water recapture rate. Hanging the mirrors from the roof also means that less surface area is used compared with solar panels on the ground.

THE POWER OF SOLAR: Amal West’s reserves are estimated at 300 million barrels of heavy oil and, like many assets in Oman, depend on EOR techniques for successful extraction. Currently, the country uses an estimated 6.8 bcm (240 bcf) per year, or 22 percent of its gas production, to power EOR projects. As Oman’s fields age, the country is increasingly reliant on EOR to maintain production. By 2023, it is predicted that EOR will account for 30 percent of the country’s oil output. More gas is needed to produce more oil.

“If Oman powered 80 percent of its EOR using solar, the country would release about 0.5 bcf (14 mcm) gas per year. The gas that is saved can be exported as LNG, but you can also divert it into local industry and create jobs,” Rob MacGregor, president and CEO of GlassPoint, told TOGY. A January-2014 report by multinational professional services company EY, predicted that 200,000 jobs could be created if this amount of Oman’s EOR becomes powered by solar projects. MacGregor predicts that full-scale use of solar EOR by 2023 could save Oman 1.4 mcm (49 mcf) of natural gas per year.

FUTURE PLANS: Pending PDO approval, GlassPoint is hoping to build more solar units across Oman but on a much bigger scale than the Amal West pilot. While nothing has yet been confirmed or details released, it has been suggested that the company is targeting production of 5,000-6,000 tonnes of steam per day.