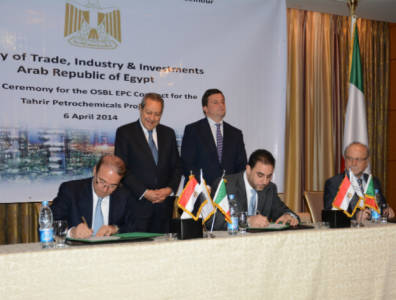 Egypt’s Carbon Holdings expects to finalise the financing arrangements for the Tahrir Petrochemicals Complex, to be built in Ein Sokhna, in the first quarter of 2015.

Carbon Holdings’ project represents a large step towards increased private sector involvement in the Egyptian petrochemicals industry. With a large balance of financing and participation from international organisations, the project also signals a resurgence in foreign investors’ confidence in the local market.

WORLD’S LARGEST NAPTHA CRACKER: In 2013, US-based multinational General Electric signed a $500-million contract with Carbon Holdings to assist in the construction of a naphtha cracker for the plant. The cracker will have a processing capacity of 4 million tonnes per year, making it the largest of its kind in the world. General Electric will provide aero-derivative gas turbines, steam turbines, generators, water filtration and desalination equipment as well as turbo-machinery compressors.

As part of a $3.6-billion contract, South Korea’s SK Engineering & Construction has been tasked with building the complex’s polyethylene plant, while German engineering company Linde will construct the ethylene facility.

CONSTRUCTION CONTRACTS: In April 2014, Carbon Holdings signed a contract for engineering, procurement, construction and commissioning for the project’s utilities and offsite facilities with a consortium consisting of Italy’s Maire Tecnimont and Greece’s Archirodon. Under the contract, valued at $1.75 billion-1.95 billion, Maire Tecnimont will build a utilities island, a seawater desalination plant, a wastewater treatment plant and a power plant. Archiredon will construct tanks, jetty works and pipelines.

Carbon Holdings has also signed a $599-million contract with Dubai-based Drake & Scull International for engineering, procurement, construction and commissioning outside the battery limits, including storage facilities and other buildings.

CHEMICAL PROCESSES: The complex’s polyethylene plant will utilise US-based Univation Technologies’ Unipol PE process line, as well as its single-reactor Prodigy bimodal catalyst and Xcat metallocene catalyst technologies. The complex’s nitric acid and ammonium nitrate processes will use technologies from Espindesa, a subsidiary of Spain’s Tecnicas Reunidas. Linde will provide the licence for the naphtha cracker.

FOREIGN FINANCING: Multinational engineering company Amec Foster Wheeler has been selected as the project management consultant. While the details of the project’s funding have not yet been determined, the first phase is expected to cost more than $5 billion. A recently planned second phase has been estimated at $1.2 billion.

The details of stakeholding in the project have not yet been finalised. Financing will come from a variety of sources, including the Korea Export Insurance Corporation, the Export-Import Bank of Korea, the Italian Export Credit Agency, the Export-Import Bank of the United States. While the bulk of financing will come from international institutions, Carbon Holdings has said it may seek out local banks for smaller loans.

The facility will produce petrochemicals for both domestic consumption and export. Carbon Holdings chairman and CEO told Egypt Daily News in September 2014 that it had signed export contracts that will guarantee that the entirety of the complex’s output is sold. The company expects to see annual returns of $7.5 billion-9.5 billion, he said.