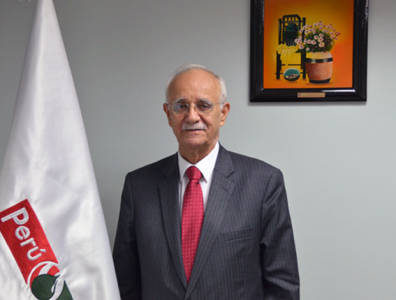 Peru will remain the South American country with the most territory left for exploration, with basins in the rainforest, on the coast and offshore ripe for discovery.

Luis E. ORTIGAS Chairman of the Board PERUPETRO

Up the ante: Hydrocarbons investment in Peru

The chairman of Peru’s state oil and gas licensing agency Perupetro, Luis E. Ortigas, talks to TOGY about obstacles caused by the country’s adoption of new oil and gas legislation and permitting processes, as well as the impact such procedures have on increasing oil and gas reserves. Perupetro manages exploration and production licences in the country.

With numerous unexplored territories and many blocks not yet contracted, Peru is an ideal location for hydrocarbons investment. The oil price slump may stifle investment in the short term. However, in the long term, Peru will remain the South American country with the most territory left for exploration, with basins in the rainforest, on the coast and offshore ripe for discovery.

NEW TENDERS: Perupetro completed one successful tender in December 2014, awarding blocks III and IV in the Talara Basin to Peruvian conglomerate Graña y Montero. This further expands the company’s exploration and production activities and diversifies its holdings away from construction, in which it has traditionally had a role.

The award of the blocks also illustrates the continuing interest of local and foreign investors in Peru’s oilfields. The fact that Peruvian companies are taking on such a prominent role in the local oil industry is a positive sign.

In addition to completing the tender for these two blocks, Perupetro is tendering seven rainforest blocks, the largest number offered at one time since 2008. These blocks – including blocks 164 and 199 in the Marañon Basin; blocks 169, 175, 189 and 195 in the Ucayali Basin; and block 187 in the Madre de Dios Basin – represent some of the most promising unexplored territories left in the country.

We are confident that new players will take an interest in the tender, which will accept bids until May 2015.

Perupetro is planning to present another tender for a batch of six offshore blocks in August 2015. We have agreed to do seismic pattern recognition, because very little technical information is available in these areas. We want to make this process much more interesting and complete for investors, so they can better decide on their bids.

GX Technology, a subsidiary of US firm Ion Geophysical, will gather the seismic information and Norway’s Spectrum has already reprocessed the existing seismic data.

PRIOR CONSULTATION: In addition to the blocks that are up for auction, Perupetro plans to hold a tender for block 192, which includes block 1AB. This block is now held by Argentina’s Pluspetrol, but the contract will expire in August 2015. Block 1AB produces about 15,000-17,000 barrels of oil per day, or around a quarter of Peru’s total production. The block is important and a new contract must be signed to progress its exploitation.

Since the last time the block was licensed, the Peruvian government has passed a law regarding prior consultation, requiring that local communities be informed of planned developments and give their consent.

This has turned out to be a lengthy and complicated process, with local groups objecting to the prospect of hydrocarbons development due to the record of environmental damage in the area since the 1990s, when it was operated by the US’ Occidental Petroleum. It now falls to the government and future operators to reassure local communities that future development will be managed responsibly.

Peru is a pioneer in the concept of prior consultation, which is supported by a 1989 International Labour Organisation mandate. In 2014, we finished five consultation processes for the blocks under the bidding round.

INCREASE RESERVES: Peru’s first priority must be to increase its hydrocarbons reserves. This translates into higher production and the government’s objective is to be able to satisfy internal demand and avoid hydrocarbons importation. Peru’s commercial balance of hydrocarbons is negative, despite increases in domestic production.

Over the next few years, several blocks may start producing, potentially doubling the country’s crude oil output. Even with this additional production, much work must be done to reach that point. In order to increase reserves, exploration wells need to be drilled.

This is hampered by the fact that environmental permits are necessary for drilling. These permits take a long time to receive. With shorter wait times for permits, companies could drill many more wells. In 2014, only 12 exploratory wells were drilled. Perupetro would like to see around 30-50 exploratory wells drilled each year.

At present, there are 70 signed licence contracts, 28 of which are in a state of force majeure, meaning that the operators are unable to fulfil their contractual obligations to drill a certain number of wells because they have not yet received environmental permits. This is a critical problem for the country’s hydrocarbons industry. In these 28 blocks, at least another 20 exploratory wells could be drilled.

Click here for more news and features from Peru