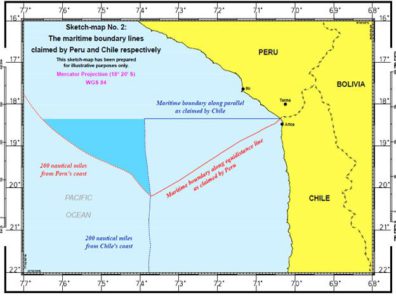 “There is no need to risk Peruvian lives by going into this mined area to show patriotism.”

A more than 130-year-old border dispute between Chile and Peru that could affect offshore mineral rights should have been settled this year by an International Court of Justice ruling. But while both sides have grudgingly accepted the verdict, they are still at odds over a 300-metre stretch of beach riddled with land mines.

The disagreement between Peru and Chile goes back to the 1879-1883 War of the Pacific, in which Chile seized slices of land and territorial sea from Peru and Bolivia, fearing the two – who were joined in a secret defence pact – were about to nationalise lucrative nitrate mines that the Chileans had developed.

Peru and Bolivia have been smarting over their defeat to this day – left landlocked by the war, Bolivia still maintains a navy on Lake Titicaca in the hope of one day getting a coastline back. For Peru, regaining what it sees as its territorial sea and a small parcel of land is both a potential source of income and a matter of national pride.

It was with this economic gain in mind that Peru asked the International Court of Justice (ICJ) to arbitrate on the border issue in 2008. After much deliberation, the ICJ issued a verdict in January 2014. The ruling gave both countries some, but not all, of what they wanted.

Per the decision, the maritime boundary should no longer extend in a straight westward line from the coast, but neither should it run roughly southwest perpendicular from the coast as Peru had demanded. The new boundary should run due west for the first 80 nautical miles then southwest as Peru had sought from there to the edge of the 200-nautical-mile exclusive economic zone.

The only trouble with the decision for Peru was that while it gained almost 50,000 square kilometres of ocean, the richest fishing is in the inshore waters retained by Chile. It is not clear what, if any, mineral deposits are to be found in the disputed territory, but any hydrocarbons present will be easier to reach in the coastal waters that remain within Chile.

Neither side could claim outright victory. As a condition for going along with the ruling, however, Chile said Peru should accept that their land border should meet the sea at a spot due west of the last frontier marker 200 metres inland, instead of at a spot following the line of border about 300 metres further south called, somewhat euphemistically, Punta Concordia (point of concord).

After much wrangling, the two sides seemed to be close to an agreement when in August 2014 Peruvian President Ollanta Humala presented a map showing its view of the boundary with Chile, with the border clearly beginning at Punta Concordia. At stake was an area of around 30,000 square metres, mainly consisting of beach dotted with active landmines.

A week later, as Peruvian nationalists prepared to march on the disputed territory, cooler heads prevailed and Peruvian police were ordered to stop the demonstrators. “There is no need to risk Peruvian lives by going into this mined area to show patriotism,” said Peru’s former interior minister, Daniel Urresti.

The two sides have gone back to the drawing board and will present new maps to the ICJ, Chilean Foreign Minister Heraldo Muñoz said in October. “We agreed that we will present a joint submission to The Hague concerning our new maritime boundary once we have completed the necessary work and finalised the details as set forth by the ICJ’s judgment,” he said.

No mention was made, however, of the small triangle of mined beachfront that remains the sticking point between the two neighbours.

For more articles and interviews from Peru, click here