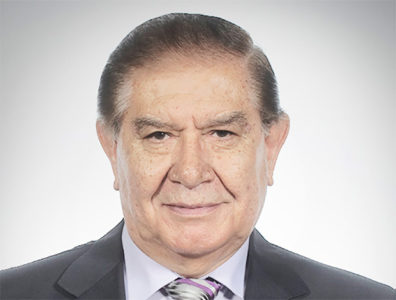 The doors of Argentina are being opened to the world. Now goods can be exported and imported more easily. The commercial balance begins to move with more agility, and we are better connected to the world. I want to transfer this to my province, Neuquén, so we can lower the production cost.

Cost of unconventional well in the USA: USD 7 million

Collaboration at all levels

TOGY talks to Guillermo Pereyra, Senator for the province of Neuquén and secretary-general of the Private Oil and Gas Union of Río Negro, Neuquén and La Pampa, about the Argentine oil and gas industry, market demands and what role foreign investors can play in the development of shale resources.

How do you assess the potential of the Argentine oil and gas industry?
First we have to talk about the general situation that the hydrocarbons industry is in. The drop of the international price of oil has severely affected practically all countries in the world with very few exceptions. Argentina is not an exception, and it has been suffering from this phenomenon very badly. However, we still have outstanding potential in regards to hydrocarbons, as can be seen in Vaca Muerta and other unconventional plays.
In this regard, the natural gas sector is fundamental. Argentina imports expensive gas from different parts of the world, such as Nigeria or Qatar. This is expensive gas that generates labour and taxes in those other countries. We do not have much gas production ourselves, but we have the world’s second-largest unconventional gas reserves. We have it right here in Neuquén and we have to exploit it. There is no doubt that we are all committed to self-sufficiency in regards to the gas sector here.

What can Argentina learn from the shale experience in the USA?
The USA was a net gas importer. When the unconventional resources were discovered, the price per million Btu of natural gas was between USD 12 and USD 14. In a smart move, the USA decided to pay that amount at the wellhead, so other companies went to exploit their shale gas. After 10 years, they managed to become self-sufficient, and that expensive gas that the USA was paying for was transformed into cheap gas because supply became much larger than demand. Thus, natural gas went down to USD 1.60 or USD 1.70 per million Btu.
It is because of the challenge posed by high natural gas prices that companies are now able to export gas to Mexico, for instance, and they will continue to do so to many other parts in the world if these prices remain the same. We have to take this really good experience and we must put it into practice. If we do not, Argentina will not be able to extract shale gas, as it does not have the financial resources.

How can Argentina increase the flow of FDI to the country?
The country will have to become more attractive for companies. For it to become attractive, it must offer a price for natural gas that really makes companies interested in coming to invest. We have to provide legal protection, which is one of the main requirements that companies ask for before they bring their investments to Argentina.
We took an important step when we got out of the default. This situation was disabling plenty of financial and economic opportunities in many other areas. We also had very bad relations with almost all countries in the world for about 12 years. We formed alliances with countries such as Venezuela, which led us into conflicts with other countries. This has prevented investments from coming to the country.
Fortunately, a change has taken place. I am neither pro- nor anti-President Macri, but I recognise that things are being done right. We must accompany the government and we must work hard to create all the necessary developments, not only in regards to hydrocarbons, but also in regards to all productive sectors so that we may be successful. We are all interested in seeing Argentina come out of this crisis that we are currently facing.
The doors of Argentina are being opened to the world. Now goods can be exported and imported more easily. The commercial balance begins to move with more agility, and we are better connected to the world. I want to transfer this to my province, Neuquén, so we can lower the production cost.
In Argentina an unconventional well costs around USD 11 million, while in the USA it costs around USD 7 million. This is not only about labour costs; logistics is another important cost. In the USA, trains can carry all the production material right to the field being exploited, reducing operational costs significantly. Everything needs to be done here. There is a project to take the train from Bahía Blanca all the way to Añelo. Logically, this will help, but all [the right] conditions need to be generated to attract companies to come and invest.

How are trade unions adapting to the challenge of developing unconventional resources?
The trade unions are also working on amending the collective labour agreement. We are carrying this out with the federal and provincial governments, as well as with the companies. We are willing to make addendums to adapt this agreement to the unconventional sector. We will soon sign an agreement to address the issue of the “taxi hours”, i.e. the shifts, travel time, wind speed work limitations and other costs that do not allow us to remain competitive.
We have to remember, though, that these benefits were not created by the trade unions, but by the companies themselves in the struggle to retain and poach skilled labour. We are going to sign this agreement to create stable conditions for workers, province officials and businesspeople so investors can come to invest and extract what is there, which we cannot do by ourselves. If we do not do this, we might end up with a reservoir full of oil and gas but people with no jobs.
This has to be done very intelligently and creatively; that is fundamental. Once we reach the agreement, we will then look to see how we generate jobs again and procure our self-sufficiency in terms of oil and gas.

Is the labour force of the province prepared for the development of shale resources?
Yes. There is a lot of training by the companies. We will surely need to carry out more and more. The boom period was too short, so we could not ready everybody as we would have liked to. There are a lot of new workers, and many of them have been preparing themselves as technicians, which has helped tremendously in terms of training.
The times in which working in oil was brute labour have ended. With the application of new technologies, we went through the learning curve much faster than the USA because all this know-how was transferred to Argentina by companies such as Chevron. We are more advanced than the USA in the speed of application of technologies, it all just needs to be put into practice.

What is the importance of sustaining a higher internal price for domestically produced oil?
The [internal] barrel price cannot be eliminated in an immediate fashion. I believe its elimination should be delayed. As the price of crude keeps going up, we may be able to converge the local price with the international one.
We must not forget that the provinces contribute a lot in terms of oil production. When each barrel was USD 120 or USD 130, the province was only receiving royalties of USD 80 due to past policies. There must be compensation, so I consider it proper for the [internal] barrel price to be higher than the international one until the market becomes more stable. Then we can leave behind the [internal] barrel price and operate with international market prices.

Is it feasible to reduce the royalties in shale developments?
There is a hydrocarbons law that I do not agree with because it goes against the sovereignty of the provinces. A lot has been done in regards to royalties. Article 59 of the hydrocarbons law states that royalties can be diminished as much as 5%; however, these are agreements with the provinces.
The provinces are in no condition to give up this part because they are in a dire situation. They have faced many cuts of their share of the federal co-participation funds, which is a distribution of national fiscal incomes and just now, they are getting back a certain percentage per year of this debt. This needs to be dealt with.
There cannot be sovereignty without autonomous provinces. The government is taking away the tool for the provinces to be autonomous. Cutting the royalties will not be possible. In the agreement we are signing between workers, provinces, nation [government] and companies, there will not be any royalty cuts. I oppose them and the provincial governments surely will as well.

What role can countries such as the USA and Norway play in provinces reaching their full potential?
All the experiences and technologies that these countries may have had in the development of technology can be transferred to Argentina, as we severely need it. Sometimes countries keep technological advancements for themselves. It would be better if they could participate with technology and knowledge transfer.

What conditions are necessary to foster investment?
The provinces are offering absolutely all of the conditions needed. To have infrastructure developments, the province and the national government must reach an agreement. The national government needs to invest in the provinces to do this.
Developing unconventional resources requires hard labour. It requires people, and it requires the resettlement of many people, so we need to have health and education systems set up. A hospital is being built in Añelo, for example, but this will not be enough for the demographic growth we are expecting. Schools, hospitals, roads and infrastructure are under the responsibility of the province and must have the support of the national government to go forward. This happened in many places that began with unconventional developments and later on, [those provinces] realised they did not have sufficient infrastructure.
Our union, for instance, has been working very hard on the healthcare sector. We have three clinics – one for YPF, one in Catriel and one in Rincon de los Sauces. The latter is virtually the only clinic in the area. We have finished a sanitation project that spanned over five-and-a-half hectares [55,000 square metres].
We are preparing ourselves instead of improvising. We are foreseeing health issues due to a lack of infrastructure in the oil areas of Neuquén. In this direction, we are caring for workers needs, since they have been carrying out our activity. They have full health coverage for free. The trade union gives it to them. Medicines are free as well.
The provinces and national government need to foresee all of these, and not wait until there is a large demand. We are convinced that this is the best way to operate: foresight, not improvisation. We firmly believe that we must maintain excellent relationships with the business sector as well. They put in the capital and we put in the labour. We want to be partners. Partners understand that many things need to be negotiated, but fundamentally, they preserve social peace. This will bring investments. For there to be investors, there must be social peace.