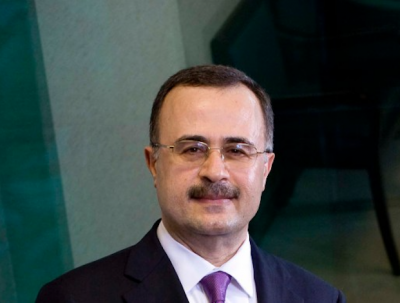 Aramco nevertheless plans to invest more than USD 300 billion in exploration and development over the next decade, he added.

“Financial investors are shying away from making much needed large investments in oil exploration, long-term development and the related infrastructure,” Nasser said.

“Investments in smaller increments such as shale oil will just [don’t] cut it.”

On Monday, Bloomberg reported that lack of investments was hurting older fields in particular, which produce about a third of the global oil supply but are declining more quickly now than at any point in about 25 years.

Some USD 1 trillion of investments have already been lost in 2014 and some 20 million bopd of new production would be necessary by 2022 in order to balance rising demand and declining production at mature fields, Nasser added.

His message contrasted with the more optimistic note former ExxonMobil CEO and current US Secretary of State Rex Tillerson sounded on Sunday as he received the Dewhurst award at the same conference. Tillerson voiced his confidence that oil companies would continue to invest in exploration and development.

“They’ll take the risks and they’ll persevere,” he added.

The more somber assessment from Aramco’s CEO came days after official data showed that Saudi Arabia, which is locked in a competition with US shale producers as it seeks to stir OPEC toward shoring up oil prices, was hit with its first dip in GDP since the latest global recession.

In Q1 2017, the oil-rich nation’s GDP was 0.5% lower compared to Q1 2016, almost exclusively attributed to a 2.3% fall in output from the hydrocarbons industry in the wake of a global production cut deal that came in force in the beginning of January.

ADNOC to privatise services entities
Next

ONGC Videsh to bid in Lebanon round