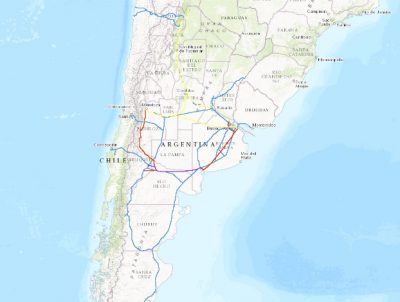 BUENOS AIRES, February 8, 2017 – Argentina’s Ministry of Energy and Mining launched three tenders on Tuesday for acquisition and transportation of pipes for four gas pipeline projects throughout the country.

One tender is for an expansion of the Central Region II pipeline, which will enhance gas transportation in the Santa Fe province, as the pipeline is currently at 100% of its capacity. This is expected to increase gas users in the province by 34,000. Central Region II will eventually connect with the major Northeast Argentine Gas Pipeline, currently under construction.

The final tender relates to the Cordillero Patagónico pipeline, which runs through the Río Negro and Chubut provinces. Work will include loop reinforcements and the installation of another compressor. Estimated to cost USD 1.7 billion, the project targets the connection of 22,000 new users to the gas grid.

The ministry is expected to open a call for bids for the acquisition of compressors next week, and begin the tender process for assembly activities some time in Q2 2017.

Altogether, work on the pipelines is expected to require investments totalling USD 4 billion and allow for 140,500 residences in the affected provinces to be connected to gas supplies.