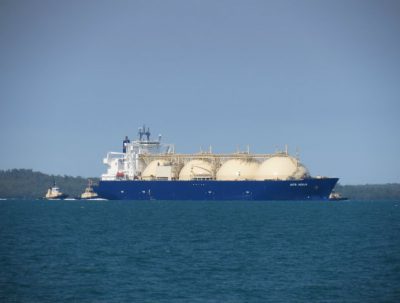 Australia’s LNG exports on the rise

SYDNEY, August 15, 2016 – Australia’s LNG exports rose by 2% last month following a worldwide rise in demand for the product, according to a report released by consultancy firm EnergyQuest today.

In total, the firm measured exports of 3.7 million tonnes of LNG in July through 56 shipments, an increase of 97,000 tonnes over the previous month.

The rise is attributed to high production on Australia’s Woodside-operated North West Shelf and the new addition of a second train at Gladstone LNG. According to EnergyQuest, Woodside shipped 1.6 million tonnes through 24 cargoes in July, up from 1.4 million tonnes through 21 cargoes the month before. Gladstone LNG, operated by local firm Santos GLNG, shipped 430,500 tonnes in July, up from 379,400 in June.

Australia Pacific LNG exported 395,000 tonnes of LNG through six shipments in July, up only slightly from 394,200 tonnes the month before.

Other LNG producers did not fare as well on a month-on-month basis. Chevron delivered one shipment of 69,300 tonnes of LNG from its Gorgon LNG project due to a pause in production caused by a leak in the asset’s acid removal unit. Shell exported 610,300 tonnes through nine shipments from its QCLNG project in July, down from 662,600 tonnes in June due to maintenance. Darwin LNG also dipped, delivering 182,400 tonnes in three shipments in July, compared to 322,000 tonnes in five cargoes the month before, due to planned maintenance on the plant July 9-July 26.