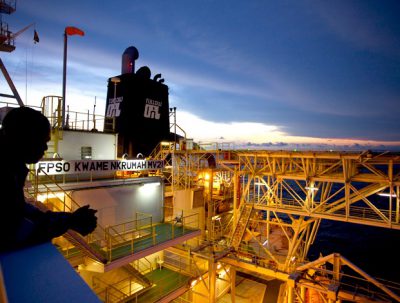 ACCRA, March 3, 2015 – Tullow Oil stock prices plummeted following Côte d’Ivoire’s petition to the International Tribunal of the Law of the Sea to halt exploration and production pending resolution of a boundary disagreement with Ghana. The disputed area includes the Tweneboa, Enyenra and Ntomme (TEN) fields operated by Tullow in the Deepwater Tano block.

A decision on Côte d’Ivoire’s petition is expected by April 2015. If successful, projects in the area, including TEN, would be suspended pending the final verdict of arbitration in 2017.

Tullow has said it will continue with the TEN project. The government approved the company’s development plan in 2013 and first oil is expected in mid-2016. As the operator, Tullow holds a 49.95-percent interest. Its partners are Kosmos Energy (18 percent), Anadarko (18 percent), Sabre Oil & Gas Holdings (4.05 percent) and the Ghana National Petroleum Corporation (10 percent).

The petition is the most recent development in an ongoing offshore oil boundary disagreement between the Côte d’Ivoire and Ghana. Following numerous negotiation rounds, Ghana sought a final resolution through arbitration with the international court.