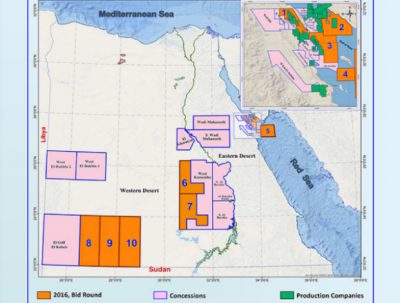 CAIRO, August 1, 2016 – The Ministry of Petroleum and Minister Resources and partner Gaboub El Wadi Petroleum Holding Company on Sunday announced an international bid round for 10 new oil and gas blocks.

The blocks, which will be offered under Egypt’s production-sharing model, are split between the area south of the Gulf of Suez and the western desert. The latter area offers the most acreage, with blocks as large as 19,000 square kilometres.

Commenting on the bid round, Minister of Petroleum and Minister Resources Tarek El Molla said the effort would be “the driving force on the path of achieving state efforts to secure energy supplies,” as well as a means to “pay for the economic and social development strategy.” The bid round will close on November 30.