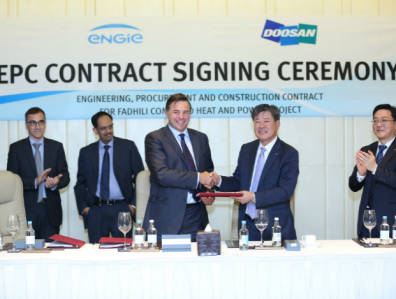 The USD 1.2-billion independent power plant will have a power generation capacity of 1.5 GW. “The Fadhili project is in line with our strategy that aims at concentrating on low carbon dioxide activities via renewable energies and gas for power generation,” Engie chief executive Isabelle Kocher was quoted as saying by local media.

Upon completion in 2019, electricity will be provided to the Saudi Electricity Company, while Saudi Aramco will utilise the produced steam and feedwater.

In related news, sources late on Friday said the first independent audit of Saudi Aramco’s reserves had been concluded.

“The independent audit produced no surprises … Aramco’s reserves have always been reported internally in line with international practice,” someone familiar with the audit told Reuters on Friday, which would imply the company controls between 261 billion and 265 billion barrels, equivalent to some 15% of the world’s proven reserves.

The audit was first announced by Minister of Energy, Industry and Mines Khalid Al Falih in mid-November in an effort to ensure the transparency of Saudi Aramco’s initial public offering.

Speaking to the Financial Times, the minister said the Aramco listing would be “the most transparent national oil company listing of all time.”

Widely regarded as the industry’s best-kept secret, no third-party has ever been able to verify the reserves managed by Saudi Aramco figures. The officially communicated levels of crude reserves have hovered near 260 billion barrels for more than 35 years.