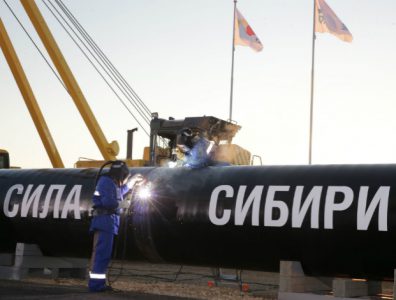 MOSCOW, May 19, 2016 – Gazprom has cut its 2016 pipeline construction target for the Power of Siberia gas transmission system by half to 400 km, a member of the company’s management board announced on Thursday, citing cost optimisation. Some 115 km have already been laid this year.

“We have cut our plans [for] construction considering optimisation of costs, but we [haven’t changed] our plans [for] launching new capacities before 2018,” Vitaly Markelov said. The gas transmission system is designed to transport gas from the Irkutsk and Yakutia production centres to Vladivostok via the 3,200-km Yakutia-Khabarovsk-Vladivostok trunkline. Phase two will see Irkutsk’s Kovykta field connected to Yakutia, home of the Chayandinskoye field, via an 800-km conduit.

The gas transmission system will be able to connect with Chinese pipelines near the town of Blagoveshchensk to facilitate gas exports. In 2014, Gazprom and China National Petroleum Corporation signed a mammoth, USD 400-billion deal that will Russia supply 38 bcm (1.34 tcf) per year for a duration of 30 years. Another point of entry is in the Republic of Altai, where a pipeline section of the Power of Siberia-2 pipeline running from the Chuyskaya compressor station will be connected to a Chinese line.

China National Petroleum Corporation hopes to finalise work on a 3,170-km pipeline from Shanghai to Heihe, across the river from Blagoveshchensk, by 2018. First gas deliveries are tentatively scheduled for 2018-2019.

Indonesia to back oil output freeze
Next