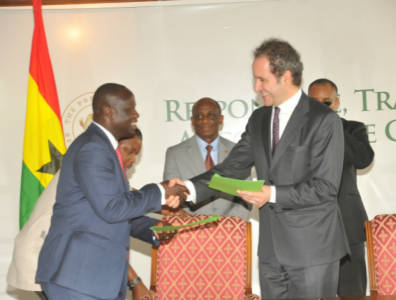 ACCRA, February 23, 2016 – Ghanaian opposition party New Patriotic Party (NNP) is being accused of using the 2015 deal with Italian oil and gas major Eni to sow discontent. According to a government statement on Tuesday, the NNP tried to create popular dissatisfaction with the country’s decision to engage with Eni on an offshore project upon the visit of Italian Prime Minister Matteo Renzi earlier in February.

NNP had said earlier that the agreement for the USD 7-billion Cape Three Points integrated offshore oil and gas development would see the country lose as much as USD 3 billion on the project.

Signed in March 2015, the deal between Ghana, Eni and partners Vitol Energy covers the development of the Sankofa and Gye Nyame fields. The project is expected to yield 80,000 barrels of oil per day and 4.8 mcm (170 mcf) of natural gas for day. Set to be fed into the country’s thermal power plants, the resources have the potential to add 1.1 GW in power generation capacity.

For more news and features on the oil and gas industry in Ghana, click here

Bulgaria ramps up its energy portfolio