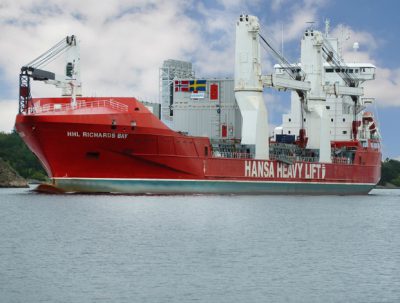 The project required precise positioning of the cargo, project engineer Tom Kroeger said. “This was particularly the case for the 500-tonne carousel on deck, which needed to be stored in a specific position to cover all supporting girders of the hatch cover to ensure sufficient load spreading,” he added.

The Offshore Cape Three Points development is an integrated oil and gas project located in the Tano Basin, around 60 kilometres off Ghana’s coast. It is operated by Eni Ghana Exploration and Production in a licence area of around 694 square kilometres in the Gulf of Guinea.