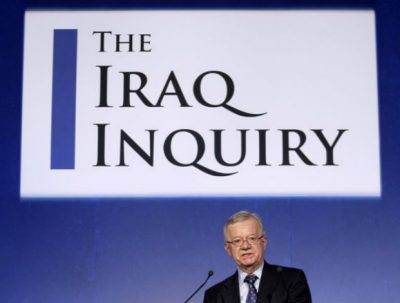 LONDON, July 6, 2016 – The long-awaited Iraq Enquiry Report was unveiled in London on Wednesday, delivering a devastating critique of the way then-Prime Minister Tony Blair made the case for the invasion of Iraq, which began on March 20, 2003.

The Iraq Enquiry Report, presented by Sir John Chilcot, also detailed the UK’s assessment of the Iraqi oil and gas industry in the run up to the invasion, and some of the concerns policy makers had at the time. According to conversations between Blair and Chief of Staff Jonathan Powell, oil prices were the prime minister’s “big domestic worry.” “Higher petrol prices really might put the public off,” Blair was recorded as saying.

The government’s assessment was that a spike in oil prices “could be short-lived.” While the invasion initially pushed WTI prices down from a 13-year high of USD 47.60 per barrel in February 2003, the price had exceeded USD 85 per barrel by the summer of 2006, its highest level since January 1982.

The Ministry of Defence’s 2002 paper on Iraq said that the country’s reconstruction should be “self-sufficient” on account of potential oil revenues, and that the immediate needs would be to “assist in restoration of key infrastructure elements” and to “secure oilfields and oil distribution/refining infrastructure.”