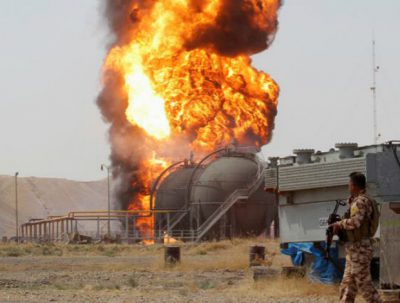 The first of two attacks took place at the AB2 gas compressor station, where four people were killed when militants stormed the site on motorcycles. According to North Oil Company, tied to the Iraqi Ministry of Oil, the Islamic State had laced the facility with explosives, with work underway to defuse and remove seven improvised explosive devices. Anti-terrorism units were able to rescue 15 employees that had been hiding during the attack.

Later in the day, the Islamic State also hit the Bai Hassan oilfield, one of two North Oil Company oilfields that have been control of the Kurdistan Regional Government since the Islamic State sent the Iraqi army fleeing the area in the summer 2014, the other being the Avana field.

The four Islamic State suicide bombers were pushed back by the Kurdish Peshmerga forces, but not before one of them blew himself up, damaging two storage tanks. A field engineer employed by KAR Group was killed in the fire that ensued, with another one injured. The three other attackers were killed by the Peshmerga.

According to the Wall Street Journal on Monday, production was halted at Bai Hassan on Saturday for reasons unknown. Kurdish news outlet Rudaw quoted a high ranking security official as saying that exports from the field were on Sunday halted “due to IS attacks.”