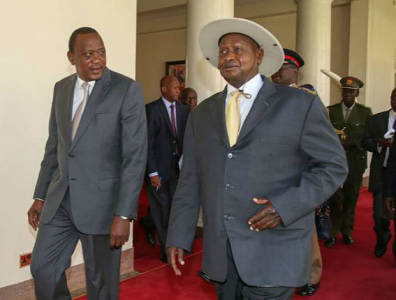 NAIROBI, March 21, 2016 – Kenyan President Uhuru Kenyatta and his Ugandan counterpart Yoweri Museveni have decided to reconvene in two weeks’ time for talks on the route of a proposed crude oil pipeline between the two countries, local media reported on Monday.

The high-level meeting on Monday included presentations by Tullow Oil, Total and China National Offshore Oil Corporation, which all have an involvement in the two countries. “The pipeline project was designed to move crude oil from the oilfields of Hoima to the Port of Lamu, through Kenya’s own oilfields at Lokichar.” Kenyatta’s spokesperson, Manoah Esipisu, wrote in a statement.

Last week, Tanzania entered the fray with a proposal to export oil via the Tanzanian coast, an idea reportedly backed by Total. Tanzania’s plan involved a 1,120-km conduit that would connect Hoima in Uganda to Tanga in northern Tanzania.

Kenya argues that a tie-in with the Lamu Port-Southern Sudan-Ethiopia Transport Corridor projects would be in the best interest of the pipeline plans. “It [the Uganda-Kenya pipeline] would transform infrastructure and the way of life of the people in the towns and counties across its path,” Esipisu said.

The Uganda-Kenya pipeline project, first announced in August 2015, would have to potential to make vast quantities of locally produced oil available to international buyers. The government of Uganda has stated that the Lake Albert Rift Basin holds 6.5 billion barrels of oil whereas the Kenyan fields reportedly hold recoverable reserves of around 600 million barrels.