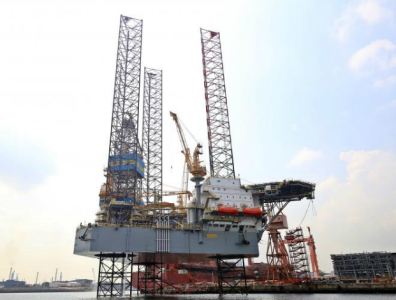 COPENHAGEN, May 30, 2016 – The Maersk Highlander jackup rig was safely delivered to Maersk Drilling by Singapore’s Sembcorp Marine on Monday.

The rig was originally designed for Houston-based Hercules Offshore, but was bought by Maersk last week due to Hercules’ financial woes. The Danish company paid for the asset, which cost USD 236 million to build, while settling the USD 190 million debt owed. This brings Maersk Drilling’s fleet to 23 rigs, with another jackup rig under construction.

Developed to withstand high-temperature and high-pressure wells, the Maersk Highlander can operate in water depths of 122 metres and drill to down to almost 9,150 metres. It can house up to 150 workers, has 907 tonnes of static hook load, 23 metre cantilever reach and is capable of handling offline pipes. Construction of the rig began in 2014.

The rig is bound for the North Sea for a five-year operation on Maersk Oil’s Culzean project.

On the same day, Hercules Offshore filed for its second bankruptcy, six months after it exited bankruptcy protection. It announced that it has arranged for a slimmer and less costly court proceeding. If it passes, the company will liquidate its assets to its creditors.