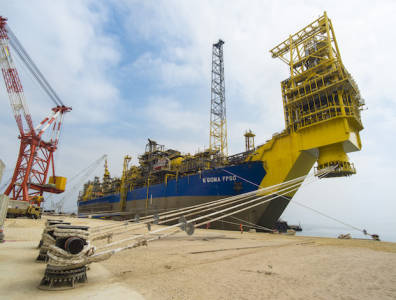 Future payments will be made as specific portions of the project are successfully completed, for a total of $590 billion. Mitsubishi’s stake in the joint venture will total 30 percent, while NYK will hold 15-percent interest.

The vessel’s topside weight will reach around 7,000 tonnes with a storage capacity of around 800,000 barrels of crude oil. The FPSO’s processing capacity is estimated at 424,800 cubic metres (15 mcf) of gas and 60,000 barrels of oil per day. The vessel has been contracted by Shell for work in the Gulf of Mexico where it will be used in the Stones development, an ultra-deep-water oil and gas project with a projected depth of 2,900 metres.

The transaction further cements the relationship between SBM Offshore, Mitsubishi and NYK, which currently own and operate stakes in the Cidade de Marica and Cidade de Saquarema FPSOs located offshore Brazil.