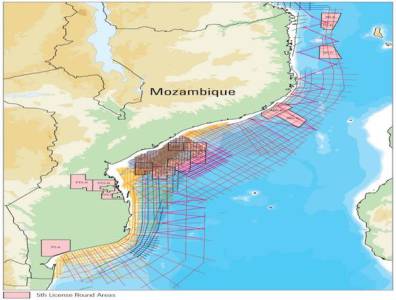 MAPUTO, April 17, 2015 – Mozambique’s fifth oil and gas bid round has been delayed until July 30, the country’s National Petroleum Institute announced on Thursday.

The originally closing date of the bid round was April 30. The Mozambique government has provided no reason for the delay.

There are 15 exploration blocks – covering a total area of 74,724 square kilometres – on offer. They include three areas in the Rovuma Basin, two in Angoche, six in Zambezi, three in Pande-Temane and one in Palmeira.

Italian oil and gas operator Eni and US independent company Anadarko Petroleum are currently developing a multi-billion dollar LNG export project in Northern Mozambique, which is parallel to the Rovuma Basin.

The country’s gas reserves are estimated to be around 5.66 tcm (200 tcf), with more than 75 percent of the reserves located in the Rovuma Basin.

The southern African country is hoping to harness its natural gas reserves and become one of the world’s largest LNG exporters, competing with countries such as Qatar and Australia.

Schlumberger will lay off another 11,000 workers
Next