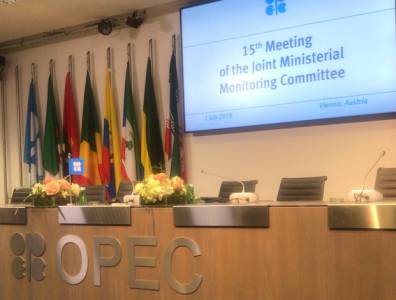 Oil up as OPEC members pledge to extend cuts

VIENNA, July 1, 2019 – Oil was up more than 2% this morning as OPEC met in Vienna following announcements from Saudi Arabia, Russia, Iraq and Iran that their leaders would agree to extend production cuts.

Reuters reported on Monday that Iran had offered its support to a plan to continue production cuts of 1.2 million bopd for six to nine months.

On Sunday, Russian President Vladimir Putin said he had agreed with Saudi Arabia to support the reduction that is supporting oil prices.

Saudi Minister of Energy, Industry and Mineral Resources Khalid A. Al Falih said that cuts would probably be for nine months at the current level.

While a deal still remains to ratified by other members, support from the largest producers is seen to be all but certain to result in an extension.

A renewal of trade talks between China and the US helped boost financial markets and oil by reducing fears of a slowing of demand.

Oil prices fall; all eyes on G-20, OPEC meetings
Next