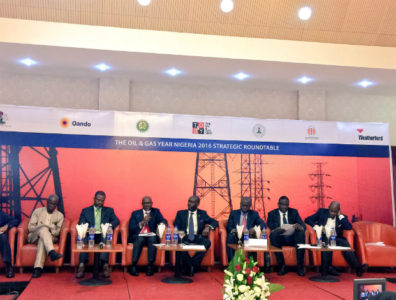 Held at the Lagos Oriental Hotel, the round table event gathered Nigerian oil and gas industry stakeholders for discussions on the market’s most pressing issues, with power generation being one of the main talking points.

Earlier this week, NNPC managing director Maikanti Baru said the volume of natural gas available for power generation was down by almost 50% to reach 19.8 mcm (700 mcf) per day, resulting in a loss of between 2.5 and 3 GW.

The panellists, which included Femi Akarakiri, managing director of Weatherford, and GE Nigeria CEO Lazarus Angbazo, lamented the state of Nigerian power generation sector, with Angbazo referring to the situation as a “national crisis.” Akarakiri, for his part, drew attention to the ongoing waste of valuable gas resources through flaring.

Also commenting on the issue, GasInvest CEO David Ige said “liquidity in the market” was the biggest problem with the gas-to-power value chain, adding that Nigeria would benefit from the implementation of a gas master plan. He pointed to the lack of regulation as being one of the obstacles to that end.

His sentiment was echoed by Sola Adepetun, managing partner ACAS-Law. “We need gas-specific legislation. We need a bill like the Petroleum Industry Bill, but for gas,” he said. Layi Fatona, CEO of Niger Delta E&P, added that the country’s institutions, such as the central bank and the ministries of power and petroleum resources, ought to develop “targeted fiscal and regulatory incentives.” GE’s Angbazo suggested to revert to the market and make “tariffs market driven,” adding that it would be the “number-one fiscal incentive.”

While acknowledging that gas pricing is a problem, Oando chief strategy officer Ayo Ajose-Adeogun said “having a place to send our gas” was as big an issue. “The gas infrastructure is just not there.” In a poll on the company’s Twitter page, 44% of respondents labelled gas infrastructure as the weakest link in the gas-to-power value chain, followed by transmission infrastructure (21%) and distribution companies (21%).