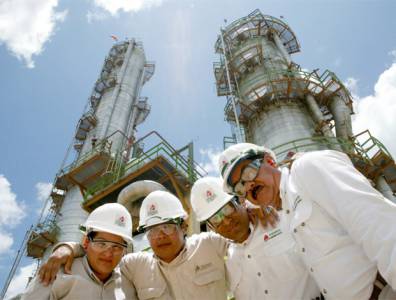 MEXICO CITY, February 17, 2015 – Mexico’s Pemex confirmed Monday that it will cut its budget by 11.5 percent to $32.2 billion. The national oil company backed cuts of $4.16 billion that were laid out by lawmakers last week, with the country’s government forced to scratch around $8.4 billion in total from its 2015 budget to offset low oil prices.

“Given the context of international oil prices and the budget regimen that applies to Pemex, it has become necessary to take measures to cut spending to achieve fiscal balance established by Congress,” the company wrote in a statement. It added that it had built a budget with an estimate of Mexican crude at $79 per barrel.

Accordingly, Pemex will delay capital ventures including ultra-low sulphur fuel projects and major refinery reconfigurations. The company has also reiterated that it will renegotiate ongoing services contracts. The potential for amendments to terms in oilfield services contracts worth hundreds of millions dollars was first announced by Pemex’s CEO Emilio Lozoya in December 2014.

Concerns over IS presence in Libya
Next