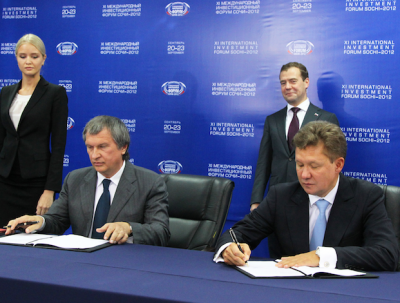 Gazprom Neft announced an 82.5% year-on-year increase in net profit to RUB 200 billion (USD 3.46 billion) for 2016, which it said was partly due to a boom in Arctic production.

“Gazprom Neft’s exceptional net profit growth in 2016 was supported by the company’s strategic projects,” Chairman of the Board Alexander Dyukov said in a press release.

“In production, this primarily relates to Gazprom Neft’s Arctic projects. In 2016, the company commenced the full-scale development of the Novoportovskoye and East Messoyakhskoye continental fields. At Prirazlomnoye, the only producing field on the Russian Arctic shelf, production in 2016 increased 2.5 times compared to 2015.”

Rosneft, which earlier this week signed signed an agreement on pre-financing oil exports with the Kurdistan Regional Government, posted a slight year-on-year growth of both revenue and earnings before interest, taxes, depreciation, and amortization (EBITDA), at 3.1% and 2.7%, respectively. Total revenue for 2016 stood at RUB 5.15 trillion (USD 89.1 billion), while EBITDA was RUB 1.25 trillion (USD 21.6 billion).

“Rosneft 4Q 2016 financial results were impacted by a series of market-moving events,” CEO Igor Sechin said in comments on the results.

“The execution of the Government decree on the Company’s privatization led one of the largest international investment fund, Qatar Investment Authority and a major oil trading company, Glencore to become Rosneft’s shareholders. The Company also acquired control of Bashneft,” he added.

On Monday, Rosneft said one of its subsidiaries had commenced exploration drilling in southern Iraq. The work is being carried out in Block 12. Bashneft’s 70% stake in the asset was transferred to Rosneft when the latter took control of Bashneft in October 2016. China’s Zhongman Petroleum and Natural Gas Group has been contracted for the drilling work. The Salman-1 exploration well is scheduled for completion in July.