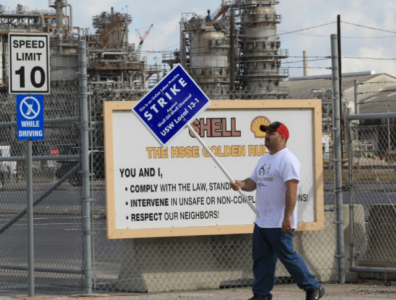 Union members on strike at major US refineries

HOUSTON, February 2, 2015 – Members of the United Steelworkers (USW) union have been on strike since Sunday morning after USW and several US refiners failed to reach an agreement on wages, staffing issues and safety conditions. Talks between USW and Shell, which conducted negotiations on behalf of plant operators, had been ongoing since January 21.

The first oil and gas industry walkout since the three-month-long strike in 1980, USW union members are on strike at nine refineries in several states across the US, including Texas. Plants in Houston, Deer Park, Beaumont, Galveston and Texas City, operated by LyondellBasell Industries, Shell, ExxonMobil and Marathon Oil, respectively, are affected. A Strike notice was also received at Marathon’s refinery in Kentucky. Lastly, Independent refiner Tesoro reported USW workers on strike at its plants in Washington and Southern California. The operators have yet to comment on the strike.

On Saturday, Shell spokesperson Ray Fisher said that the company remained “committed to resolving our differences with USW at the negotiating table to reach a mutually satisfactory agreement.” He added that Shell had a strike contingency plan ready. On the same day, Tesoro announced it would be using non-union backup workers to ensure continued operations.

An agreement between USW and US refiners would cover around 30,000 workers at 230 facilities across the country. However, analysts say that falling oil prices that have led to layoffs in the global hydrocarbons industry puts the USW at a disadvantage when it comes to bargaining.

Peruvian gas pipeline to come online ahead of schedule
Next