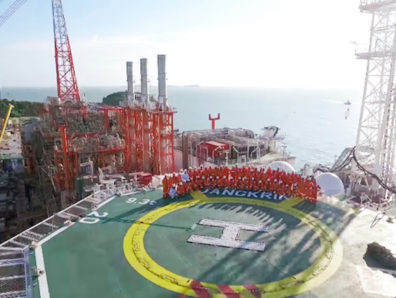 ISTANBUL, May 20, 2017 – The past week was one of bidding rounds, with both Australia and Indonesia announcing they would be making blocks available. Angola, on the other hand, was forced to cancel its offering.

Bidding rounds
The Indonesian government on Friday confirmed it would be pressing ahead with an oil and gas blocks bidding round this year. The offering will include both conventional and unconventional assets.

The Tongkol, East Tanimbar and Memberamo blocks will be made available through regular bids, while the Andaman I, Andaman II, South Tuna, Merak, Pekawai, West Yamdena and Kasuri III are up for grabs via direct offers. Included in the unconventional offering are the Jambi shale gas blocks I & II, as well as the Raja, Bungamas and West Air Komering CBM assets.

In its announcement, the government stressed the flexibility of the contractual arrangements as a means to incentivise investors. According to Deputy Minister of Energy and Mineral Resources Arcandra Tahar, the authorities will listen to suggestions regarding production sharing rules, recoverable costs and even import duties.

The Australian round covers 21 areas in 8 offshore basins off of Western Australia, Northern Australia, Tasmania, Victoria, the Ashmore Islands and the Cartier Islands, the country’s government said in a press release.

“The areas are located in water depths of 25 to 4,200 metres and vary in size from 161 to 2,465 square kilometres and also vary in level of existing geological knowledge,” the statement said, adding that the release coincided with the launch of a new “online data discovery and delivery system for all Australian offshore petroleum wells and seismic surveys acquired in Commonwealth waters” called NOPIMS 2017.

Sonangol announced the cancellation of its onshore bid round Wednesday, citing the change in market conditions since the round was launched in 2014.
Sonangol said the viability of the oil concessions had been negatively impacted by lower oil prices as well as the global and national economic situation.

“The current economic situation in the oil sector will require the reformulation of the economic analysis that supported the preparation of the published terms of reference and the minimum work programmes,” the NOC statement read.

Ramp up
Back to Indonesia, where Eni on Monday said it had brought the Jangkrik Development Project on stream.

The deepwater effort takes place in the Makassar Straight, and was expected to deliver first gas in June. Beating its own schedule, 55% stakeholder and operator Eni will now work to ramp up production from the Jangkrik and Jangkrik North East fields to 12.7 mcm (450 mcf) of natural gas per day.

The project consists of a floating production unit positioned over 10 subsea wells. Once processed, gas is transported via a 79-kilometre pipeline to an onshore receiving facility. From there, it is moved to its final destination, the Bontang liquefaction plant.

Oil prices
Russia and Saudi Arabia have reached an agreement on extending oil production cuts to March 2018, the countries announced on Monday. In a statement released in China, Russian Minister of Energy Alexander Novak and his Saudi counterpart, Khalid Al Falih, said they would do “whatever it takes” to help stabilise global oil markets.

OPEC members Iraq and Kuwait quickly threw their support behind Monday’s Saudi-Russian agreement on extending oil production cuts to March 2018. On Tuesday, Kuwaiti Minister of Oil Essam Al Marzouk pledged his country’s “full backing” for the extension. His sentiment was echoed by the prime minister of Iraq, Haider Al Abadi. The OPEC members were joined in their support by non-OPEC producer Oman, which said it would back “anything that will raise and sustain the oil price.”