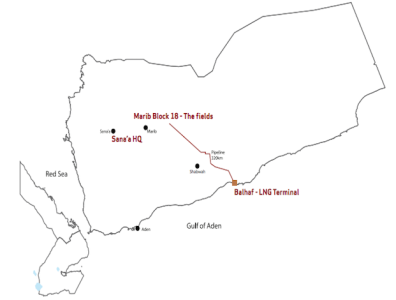 SANAA, April 14, 2015 – Yemen’s only LNG plant halted all production and exports on Tuesday. Citing security concerns, the Yemen LNG Company has declared a force majeure, meaning that it cannot meet its contractual obligations owing to circumstances beyond its control.

“Due to further degradation of the security situation in the vicinity of Balhaf, Yemen LNG has decided to stop all LNG producing and exporting operations and start evacuation of the site personnel,” Yemen LNG said in a statement. The company also added that the plant would “remain in a preservation mode.”

Fighting in the country has been on the rise for almost a month since Saudi Arabia began airstrikes against Houthi rebels. The unrest has disrupted oil and gas activity in the region, with several oil and gas tankers unable to berth due to port closures and insurance refusals. The Yemen LNG plant, which produces about 6.7 million tonnes of LNG per year, was forced to take one of its two production trains offline last week.

The Yemen LNG Company is a consortium composed of France’s Total (39.6 percent), US company Hunt Oil (17.2 percent) and the Yemen Gas Company (16.7 percent), among others.

Click here for more news and features from Yemen

WorleyParsons to work on Fortuna Project