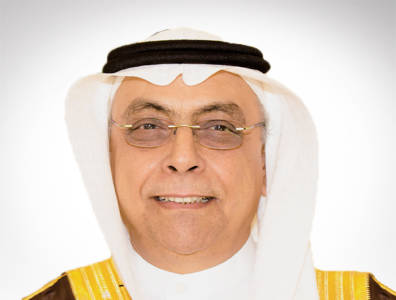 There is a catch: Whatever the technology provides, the business will become more demanding. 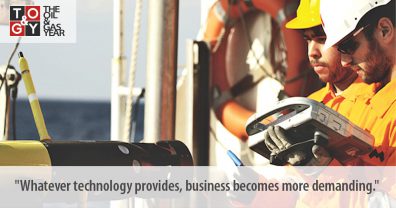 At the forefront of seismic

Saad Saud Al Akeel, CEO of Arabian Geophysical and Surveying Company (ARGAS), talks to TOGY about the latest trends in the geophysical market and the importance of R&D, talent management and support. ARGAS is a geophysical services company that does seismic and non-seismic geophysical surveys and has deployed autonomous underwater vehicles to collect seismic data in the Red Sea.

Where do you see the industry heading?
In 2014, ARGAS introduced high-channel seismic crews in Saudi Arabia working for Saudi Aramco. This was a major achievement for us. It involves putting in more resources to do unique acquisition and advanced processing. We conducted a seismic acquisition pilot for Saudi Aramco and achieved over 44,000 shot points per day, a world record of productivity. We are now capable of doing up to 50,000 shot points per day.
We have tried to be ahead of the curve from a resources point of view. It is just like a pixel in a picture: The more pixels, the crisper the image. It is as simple as that. The more equipment you put on the ground to receive information from the subsurface, the crisper and clearer the image.
There is a catch, though. Whatever the technology provides, the business will become more demanding. When the business consumes all of the available resources, there is a challenge for the technology to come up with a breakthrough. The catch is always there.
Today, the catch is the data – the huge amount of data. We used to produce less than 1 TB [terabyte] of seismic data per week and now we are producing up to 3 TB per day per seismic crew. How can one deal with such huge amounts of data? One needs high-performance computing and automation, i.e. machine learning, to process and do the analysis, as well as interpret the results by incorporating all types of data such as seismic, non-seismic, drilling, logging and production data.
From the point of analysing the huge amounts of varied types of data, the imaging centres are becoming bigger and bigger, not in physical size, since that is shrinking, but in capability. One data processor can do far more than his counterparts could have done 10 years ago, which is moving the whole industry towards automation in data acquisition, processing and management.

Which projects do you have on the horizon?
We have several large projects, but the biggest one we are preparing for is in the Red Sea. We will be acquiring the largest ocean-bottom node (OBN) survey ever there, in a region that Saudi Aramco is focusing on. We have done several similar surveys previously in the Arabian Gulf, where we have surveyed an area from the Qatar peninsula all the way to the Iraqi border.

What improvements are needed to explore Saudi Arabia’s true potential?
This Kingdom of Saudi Arabia is blessed with so many things, such as a business-friendly leadership under the guidance of the Custodian of the Two Holy Mosques King Salman bin Abdulaziz and the Crown Prince Mohammad Bin Salman, a highly qualified and young population, huge oil and gas reserves as well as huge mining potential.
Regarding oil and gas exploration and development, even though we have huge oil reserves, the country is practically still under-explored. Saudi Arabia is and will continue to be the largest and most stable exporter of oil to the world. However, many existing fields are ageing and will need further exploration and development to maintain production at a sustained rate.
In order to continuously explore and develop, one requires more seismic surveys and advanced analyses of the data done by companies such as ourselves. This has led to a huge increase in seismic data acquisition activity in the Kingdom of Saudi Arabia and in the greater MENA region with clients requiring high channel crews with dozens of seismic sources (vibrators). This requires innovative acquisition strategies and processing and imaging of the seismic data to explore deeper and more complex reservoirs.
ARGAS has been at the forefront of providing the latest equipment and seismic acquisition and imaging methodologies to our clients in the region. One of these seismic acquisition technologies is the unconstrained blended acquisition technique, in which all the seismic sources (vibrators) in the field work independently of one another.
This method of acquisition maximises the use of equipment in the field, and for a given configuration, it is faster than conventional acquisition methods (reduced turnaround), and it is better for health, safety, and Environment (HSE) since the same project can be completed in a fraction of the time and with less HSE exposure. ARGAS is proud to be the first seismic services company to offer this technology to our clients in the region to help them meet their exploration and development goals.

How is your research Centre in the Dhahran Techno Valley progressing?
Hopefully we will start construction in 2019. The centre is designed to promote all of the research available for our industry and we have a wealth of information and talent around us that we can draw from.
The centre will be an incubator that will help us to promote and speed up initiatives that can help us and the industry to come up with innovative technologies. As mentioned earlier, with huge amounts of data being gathered on a regular basis, the focus of our Innovation Center in the DTV will be on the automation; for seismic acquisition, analyses and interpretation.

How does your vision harmonise with the 2030 vision, which puts diversification first?
Our vision, created in 2012, is to expand both laterally and vertically. Laterally, we moved into markets adjacent to Saudi Arabia. After that, we expanded to the whole Gulf, and we are now also operating in Egypt. We could have a bigger footprint if we wanted to, but security reasons do not allow us to go to places such as Syria and Iraq.
Wherever we go, we hire locals. We do not just do what our competition does and bring our own people from our own country. The composition of our crew in Egypt is 90% Egyptian, and our crew in Oman is 85% Omani.
We have a joint project for technology development with King Abdulaziz City of Science and Technology (KACST) in Riyadh. This is to take the underwater autonomous vehicle technology that we have tested in the Red Sea and to develop it further. KACST sees a potential in using the technology in other domains besides oil and gas exploration. We are confident that the technology will be successful and in 2020 it could be manufactured in the kingdom at a commercial scale.
Diversification is one of our main objectives for the next few years. We are getting into other sectors such as the mining and ground water industry. We can perform geophysical services for the local mining entity, the Saudi Geological Survey (SGS) and the General Commission for Surveys (GCS), providing them with almost a full suite of geophysical solutions for mineral exploration.
We see more opportunities for diversification coming up in the near future. The kingdom has realised that they need to regulate the water resources and initiate a water policy. We have tools to help with this. We aim to be a vital and effective contributor in moving the country forward to enable the 2030 vision to be realised.

How do you co-operate with local universities?
We established a workspace in King Abdulaziz University, and donated, with our technology partner CGG, our geophysical interpretation software for use on their workstations. We extend help to universities, which helps us later on because their graduates come and join us. It is helpful to have them trained there before they come. Every year we have about 20 students doing their co-op training with us. The students spend a couple of weeks on our seismic crews to learn how the seismic survey is planned and executed and how the data is quality controlled and managed. The students also spend time in our technology centre in Al Khobar for hands-on analyses of the seismic data.