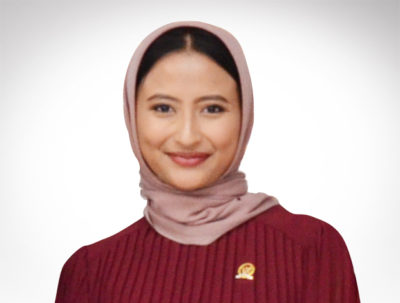 Dyah Roro Esti Widya Putri, member of the House of Representatives of the Republic of Indonesia, talks to The Energy Year about the government’s push for renewables and lowering emissions, as well as the rise of biofuels. Dyah Roro Esti Widya Putri is also the co-founder of the Indonesian Energy and Environmental Institute (IE2I), an NGO that works to promote sustainability.

What has the government done to promote environmentally friendly practices in the energy industry?
Indonesia has committed itself to reducing carbon dioxide emissions unconditionally by 29% and conditionally by 41% by the year 2030. Our goal is to pinpoint the main sectors contributing to greenhouse emissions, whether it is energy, waste, agriculture or forestry. Unfortunately, the energy sector plays one of the largest roles when it comes to carbon dioxide emissions in Indonesia.
The government has created a policy that aims to have 23% of energy coming from renewables by the year 2025. This benchmark is ambitious. To reach it, we must first understand the current power generation roadmap in Indonesia. Renewable energy stood at 13-14% of the energy mix as of May 2019. A total of 7.6% comes from hydro, 4.95% from geothermal and 0.5% from biodiesel. Solar, wind, and biomass represent the minority at 0.27%.
While parliament creates policies, it is the mission of each and every player in the country to execute them according to the target in place. The duty of parliament is to monitor how fast we can reach this goal within a five-year span. We are currently pushing a regulation for renewable energy that is unprecedented in the country. Although it has been under discussion since 2018, it has now been given priority.
The world is rapidly changing. The introduction of novel concepts and dynamics is needed to pave the way towards a more sustainable energy sector in Indonesia. Introducing these concepts requires initiative and time, which means like-minded politicians need to work together towards a common goal.

What can the public sector do to encourage decarbonisation?
At present, Indonesia’s main electrification source is coal. It accounts for a large 56% of the energy mix because it is the cheapest available option. Fuel subsidies are also an important setback to bringing renewables to a market that seems to be dictated by low energy pricing. We are trying hard to make renewables more competitive within the energy market.
One viable scheme is integration or calculation of negative externalities associated with different levels of emissions. Carbon pricing, while a rather unpopular scheme, could be an option. Other countries have adopted it as a means towards decarbonisation. Carbon pricing is when emitters are charged per tonne of carbon dioxide based on their activity, whether it be companies or industries. This scheme encourages the development of emission-control technologies.
Another initiative is the introduction of a carbon tax. This plan would tax certain percentages of emitted carbon dioxide from different industries. It would automatically make renewables more competitive in the energy market.
The unpopularity of these kinds of measures, especially among more traditional industries such as coal, makes them difficult to pass. Nevertheless, we must change how supply chains function in the circular economy. Sustainability must be placed at the centre of everything we do, including business. We are working on how to make the renewables space friendlier from a business standpoint and attract investment.

Why does Indonesia need to switch up its energy mix?
We all know that the oil and gas industry has an expiration date, simply because resources are finite. We must be open to options that are infinite, such as renewable energy.
Oil and gas resources in this country are decreasing rapidly. We are trying to slow down natural decline by increasing reserves replacement ratio. Both NOCs and IOCs need to increase their exploration activities in Indonesia to hit SKK Migas’ production target of 1 million bopd by 2030. It is not an easy target. One way of enhancing exploration beyond increasing investment and incorporating more technologies is making sure the energy business is more sustainable.
We are made up of 17,000 islands and each region has its own speciality. Nusa Tenggara Timur is a region suited to solar energy, while in Sulawesi there is a strong drive for wind energy. We have different strengths in different areas. It is all about maximising and optimising strengths in order to satisfy the country’s energy demand.
Indonesia intends to be one of the top five largest economies in the world by 2050. The increase in economic activity will mean a sharp increase in energy and electricity demand. To fulfil these energy requirements, we cannot only depend on coal, oil and gas. We must focus on optimising renewables.

What milestones has Indonesia passed on its mission to incorporate biofuels?
Pertamina has recently paved the way for B30 in its quest towards environmentally friendly fuel. While the natural components of B30 include 70% diesel and 30% FAME [fatty acid methyl ester], we are trying to decrease the ratio of diesel. Studies are being carried out on how communities are reacting to B30. Unfortunately, it has caused corrosion problems in machines and engines. Pertamina is working hard to make sure that components of this fuel can be improved with the second generation.
There will hopefully be a shift in the automobile sector in order to generate machines that are more compatible with biofuel. The goal of B30 being implemented by January 2020 has been achieved. We are now making sure it goes smoothly. The next step is coming out with B40 – the next generation of biofuel – by the end of the year and B50 by 2021. It is a very rapid shift, but we must make sure we create solutions for a better and more sustainable Indonesia.

Do you think that an Indonesia powered by renewables is a possibility?
I strongly believe a green and sustainable future is possible. It boils down to how much of an effort we are willing to make. We need to understand that there are different players and that everyone plays a part, from parliament to communities, academia and individuals. Recognising the power we have is essential. We need to acknowledge that we cannot reach these goals alone. Although a shift towards a more sustainable Indonesia will not happen overnight, we are taking slow but steady steps to materialise the energy transition as a reality in this country.

What does IE2I do to promote sustainability?
The whole ethos behind IE2I is to create a sustainable future for Indonesia. In order to achieve this, we adopted both a top-down and a bottom-up approach. For the first, we engage with policy makers, ministers, fellow activists, educators and institutions on how we can work together and create a sustainable future collectively. Channelling know-how down to individuals is a key step in solidifying collective change in this country.
The bottom-up approach relies on the power of the people. Communities play a vital role in creating social changes. We make sure people are familiar with the concept of sustainability. People are often not aware there is a problem. We encourage them to save energy, take public transportation and reduce the use of plastics. We also work alongside local governments to set correct policies.