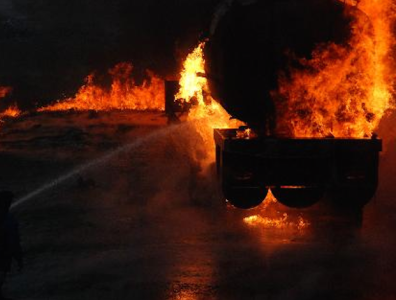 MEXICO CITY, January 20, 2016 – An exploding gas tanker has injured at least 15 people in the central Mexican city of Tonala, the Jalisco State Unit of Civil Protection and Fire announced late Tuesday. Six of the 15 wounded are said to be in critical condition, according to Mexican news reports.

The accident was caused when the vehicle’s brakes failed and it crashed into overhead power lines causing a fuel leak that ignited. Several parked vehicles and local businesses were also destroyed and around 160 children were evacuated from a nearby kindergarten. The fire brigade worked for 40 minutes to get the flames under control.

The incident is the latest in a series of hydrocarbons incidents in Mexico. In 2015, there was an explosion on Pemex’s Abkatun-A platform in the Bay of Campeche in Mexico, costing the company USD 670 million-780 million. That same year there was a rupture at one its pipeline that left thousands in Villahermosa without drinking water in addition to the death of two workers aboard the Troll Solution rig in the Gulf of Mexico.

For more features and news in Mexico, click here.