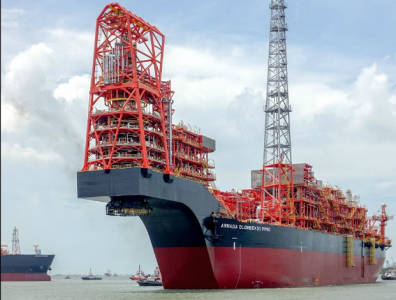 The discovery was estimated at 200 million-250 million barrels of oil in place. It was made at a well drilled in the Cuica exploration prospect located inside the Cabaça Development Area and close to the Armada Olombendo FPSO (East Hub).

The super-major anticipates a production capacity of around 10,000 bopd from the well.

“Block 15/06 has been one of the biggest success stories in the history of Eni,” Eni Angola managing director Matteo Bacchini told The Energy Year in January. Bacchini said the company was “setting up aggressive plans to restart programmes in Block 15/06, on both the exploration and development fronts.”

The Cuica-1 NFW was drilled as a deviated well by the Libongos drillship in water depths of 500 metres, reaching a total vertical depth of 4,100 metres and encountering an 80-metre-total column of light oil (38 degrees API).

Eni has been pursuing what it terms an “infrastructure-led” exploration strategy in the block, and the find was made close to the East Hub’s subsea network.

The find comes as Angola readies a roadshow for its delayed 2020 bid round, to be held April 12.

For more on Eni’s operations in Angola, read our latest interview with managing director Matteo Bacchini.