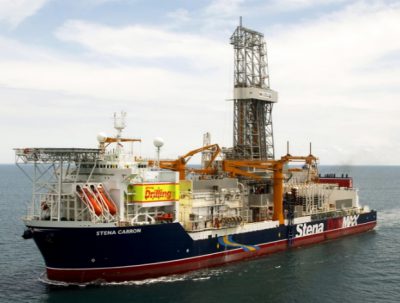 IRVING, June 30, 2016 – Drilling results from ExxonMobil’s Liza-2 well offshore Guyana have confirmed the presence of as much as 1.4 billion boe in recoverable resources, the company said in a press release on Thursday.

Drilled in 2,692 m of water in the Stabroek block, the well encountered oil-bearing reservoirs in Upper Cretaceous formations. According to ExxonMobil’s local subsidiary, Esso Exploration and Production Guyana, the 58-m reservoirs hold recoverable resources of between 800 million and 1.4 billion boe.

“We are excited by the results of a production test of the Liza-2 well, which confirms the presence of high-quality oil from the same high-porosity sandstone reservoirs that we saw in the Liza-1 well completed in 2015,” president of Exxon Mobil Exploration Company Steve Greenlee said.

The 26,800-square-kilometre Stabroek block, operated by Esso on a 45% stake, is located some 190 km off Guyana. Esso’s partners in the venture are Hess Guyana Exploration with 30% and China National Offshore Oil Corporation Nexen Petroleum Guyana with 25%.

Speaking to TOGY in June, Minister of Natural Resources Raphael Trotman said the country’s government was first made aware of the hydrocarbons find in May. “Since then,” he said, “the task of the Ministry of Natural Resources has been to define exactly what we have and look at the industry to see at what point the government has to have direct intervention through legislation, the regulatory framework and the finding of experts to advise the government.” He added that the government’s main priority now is capacity building and to gain a better knowledge of the oil and gas industry.