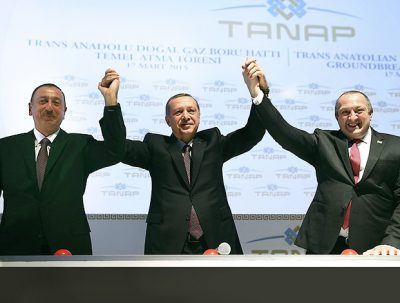 Along with the South Caucasus Pipeline and Trans Adriatic Pipeline projects, TANAP is part of the Southern Gas Corridor, an initiative of the European Commission to supply Caspian and Middle Eastern gas to Europe.

TANAP will stretch some 1,967 kilometres – feeding from the South Caucasus Pipeline from Azerbaijan via Georgia – through Turkey and into western Greece. According to plans, with first gas expected in 2018, TANAP will connect to the Trans Adriatic Pipeline, transporting gas to Albania and then Italy.

To accommodate higher volumes of production from the second stage of Azerbaijan’s Shah Deniz gasfield development, which has an estimated 1.2 tcm (42.4 tcf) of gas reserves, TANAP’s initial yearly capacity will rise to 31 bcm (1.09 tcf) by 2026.

Appraisals for the cost of the pipeline’s construction stand at around $10 billion-11 billion. The State Oil Company of Azerbaijan Republic, or SOCAR, has a 58-percent stake in the project, with Turkey’s state-owned Botaş holding 30 percent and BP, operator of Shah Deniz, with the remaining 12 percent.