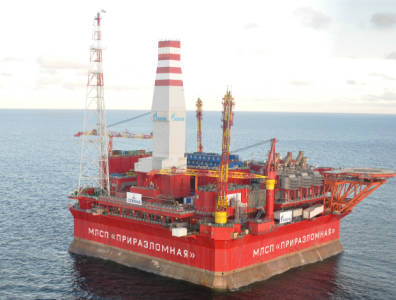 MOSCOW, August 20, 2015 – Gazprom Neft has added a second well to its Prirazlomnoye oilfield in Russia’s Pechora Sea, the company confirmed on Wednesday. The subsidiary of Russia’s state-controlled Gazprom said the addition would lead to a twofold increase in output from 2.2 million barrels in 2014 to 4.4 million in 2015.

In April, Gazprom Neft announced plans to drill a total of four development wells at Prirazlomnoye in 2015, and a further 14  over the next few years. Drilling will be conducted by the ice-resistant Prirazlomnoye rig, custom-built to withstand the area’s harsh operating climate, and to which the wells will be tied back. The field is operated by Gazprom Neft’s Arctic-focused subsidiary, Gazprom Neft Shelf.

Oil began to flow in 2013 at the Prirazlomnoye field, which sits 60 kilometres offshore, and is currently the only producing field in Russia’s Arctic territory. It is estimated to contain around 500 million barrels of oil, and Gazprom Neft is aiming for a peak production rate of 42 million barrels per year.

Gigajoule and Afro in gas off-take talks
Next