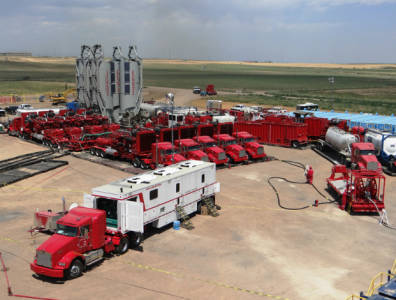 Halliburton did manage to see an uptick in quarterly revenue, earning USD 4 billion, a gain of USD 200 million over the third quarter. However, this number was still down 16% from Q4 2015.

The results came as no surprise amid decreased commodity prices and an industry-wide slowdown. Rival oilfield services giant Schlumberger released its 2016 financial results on Friday, posting a net loss of USD 1.68 billion last year, down from a profit of USD 2.07 billion posted at the end of 2015. Revenue was down 22% to reach USD 27.8 billion.

Halliburton chairman and CEO Dave Lesar pointed to two cycles playing out globally across the industry and on the company’s bottom line. “The North America market appears to have rounded the corner, but the international downward cycle is still playing out,” he said, adding that lower oil prices had put a strain on the company’s budgets and had affected “economics across deepwater and mature field markets” on the international stage.

“Despite these headwinds, we maintained our margin in the Eastern Hemisphere for the fourth quarter. We do not expect to see an inflection in the international markets until the latter half of 2017,” said Lesar in a company statement.