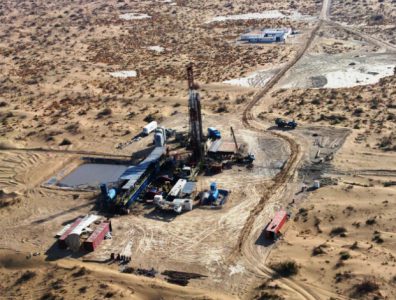 TASHKENT, April 20, 2016 – Lukoil has started construction work on a gas-processing complex in Uzbekistan that will receive gas from the Kandym fields in the southwestern Bukhara province. The start of construction was marked with a ceremony on Tuesday attended by Prime Minister Shavkat Mirziyoyev and Lukoil president Vagit Alekperov.

Called the Kandym Gas Processing Complex, the facility will have a capacity to process 8.1 bcm (286 bcf) per year. The development’s gas gathering system comprises 114 production wells, drilled from 11 well pads, and four gathering stations. The system will also consist of a 370-km pipeline network. The construction phase will involve some 7,000 people.

“The beginning of construction of the Kandym Gas Processing Complex marks a new stage in the development of gas resources in Uzbekistan. The complex will be one of the largest in Central Asia, and its operation will enable the creation of more than 2,000 full-time employment positions,” Prime Minister Mirziyoyev said in a speech.

Operated by Lukoil on a 90% stake, the gasfields are forecast to produce 330 bcm (11.7 tcf) and more than 73 million barrels of condensate over the duration of the production-sharing agreement, which runs until 2046. Uzbekneftegaz, the country’s national holding company, owns the remaining 10% in the venture.