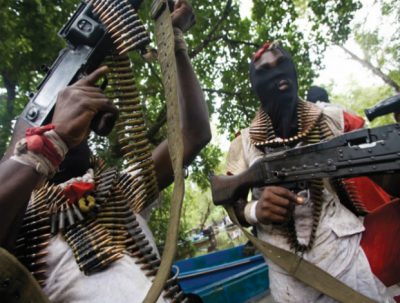 ABUJA, July 19, 2016 – A pipeline near Warri, Nigeria was attacked Monday. While no militant group has claimed responsibility yet, local media on Tuesday credited the attack to the Niger Delta Avengers.

According to Punch, the Avengers blew up a Shell Petroleum Development Company of Nigeria trunk line in the early hours of Monday morning. The militants struck near Camp 3, located in the more remote parts of the Batan swamps. The area is difficult to access, resulting in a major oil spill. Crude was still spilling from the conduit at 4.32 pm, when a team from the Pipelines and Product Marketing Company, operator of the line, was able to make its first assessment of damage.

Also on Monday, Chevron’s host communities in Gbaramatu-Ijaw issued a 72-hour ultimatum for the release of five pipeline surveillance workers. Held on the suspicion of being Niger Delta Avengers members, the locals state they are falsely accused.

“We are not Niger Delta Avengers, we are law-abiding citizens of Nigeria, and those workers were doing their legitimate work,” Kokodiagbene community chairman Sheriff Mulade said. Failure to comply would cause the communities to withdraw their services to the oil companies in the area, including Shell and Nigerian Petroleum Development Company, he added.