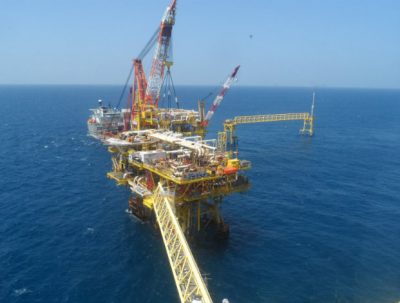 US President Donald Trump told reporters overnight that a trade agreement with China could happen “sooner than you think,” rising hopes that global oil demand will increase. China and the US are the world’s biggest oil importers.

Trump’s comments came just one day after he said he would not accept a “bad trade deal” and accused China of unfair trade practices.

On the other hand, Bloomberg cited people with knowledge of the matter and reported that Saudi Arabia has boosted total production capacity to more than 11 million barrels a day, which is more than its previous target.

Oil prices were under some pressure after data showed an unexpected rise in U.S. crude inventories.

US oil stockpiles rose by 2.4 million barrels last week, the Energy Information Administration reported, against market expectations for a draw of 250,000 barrels. It was the second-straight weekly crude build cited by the EIA after four-straight weeks of unseasonably heavy crude draws late into the summer that took 24 million barrels off stocks.

“This could be the clearest signal that the post-summer crude draws are over and that we could see substantial builds here on, which is hardly ideal for oil bulls as the risk impact from the Saudi attack is slowly fizzling,” Investing.com analyst Barani Krishnan said.