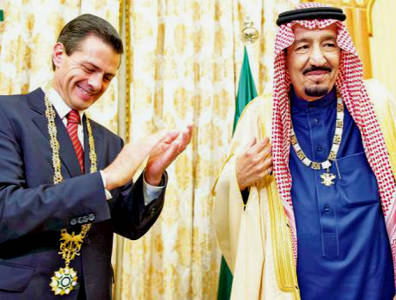 “Market forces as well as the co-operation among producing nations always lead to the restoration of stability. This, however, takes some time,” Oil Minister Al Naimi said. “Mexico and the kingdom have an especially important role to play in achieving this objective, in the past, at the present, and in the future.”

President Peña Nieto, who is also visiting the UAE, Kuwait and Qatar, is working to attract foreign investment in Mexico’s oil and gas industry after the end of Pemex’s 77-year monopoly. Though Saudi Arabia is a much larger oil exporter with 7.15 million bopd, according to OPEC figures, Mexico has a daily production of 2.8 million bopd and exports about half of it.

For more information and features on Mexico, click here.