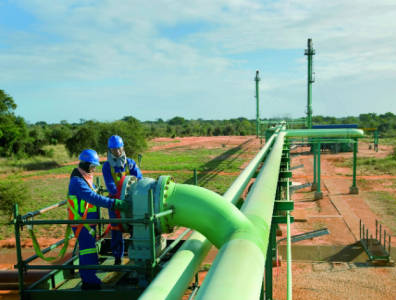 MAPUTO, February 3, 2016 – Sasol has been given the go-ahead for the staged development of oil and gasfields some 600 km north of Maputo, the South African energy and petrochemicals company announced Monday.

A majority stakeholder in the Panda and Temane fields, Sasol will kick off its field development plan with an integrated oil, LPG and gas project in proximity to its petroleum production agreement area, from where it currently produces and processes natural gas. The resource reaches markets in Mozambique and South Africa via an 865-km pipeline.

Home to an estimated 2.27 tcm (80 tcf) in natural gas resources, Mozambique has in recent years attracted a host of energy majors. Eni of Italy and US energy company Anadarko will see their field development plans approved before the end of 2017, the country’s Natural Hydrocarbon Company announced on January 31, 2015.

“The Mozambican gas industry is playing an increasingly important role in the regional energy landscape, and this project represents a major milestone in further developing natural resources, which will significantly benefit Southern Africa,” Sasol president and CEO David Constable said in a statement published on the company’s website.

Cue hits oil in Indonesia
Next