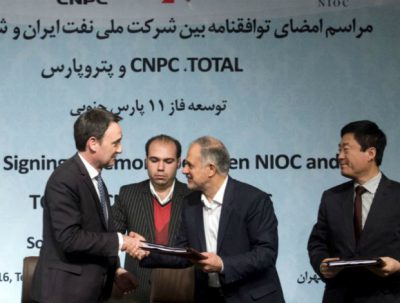 Total wary of US sanctions on Iran

PARIS, February 9, 2017 – Total says it will reach a final investment decision on Iran’s South Pars project by summer, but its commitment will depend on the renewal of US sanction waivers.

The company plans to participate in phase 11, an area of the super-giant South Pars gasfield that is slated to produce 56.6 mcm (2 bcf) per day once developed.

CEO Patrick Pouyanné said on Thursday Total will go ahead with the project if sanctions waivers signed by former US President Barack Obama remain in place.

The Trump administration has indicated that it may not honour the 2015 nuclear deal with Iran, and last week introduced new sanctions in response to Iran’s test-firing of a missile.

In November 2016, Total, leading a consortium with China National Petroleum Corporation and Iran’s Petropars, signed a USD 4.8-billion heads of agreement with the National Iranian Oil Company to develop phase 11. According to the agreement, Total will operate the project with a stake of 50.1% while CNPC and Petropars will have 30% and 19.9% stakes, respectively.

The deal was signed on the day of the 2016 US elections, and it marked the first entry of a major IOC into the post-sanctions Iranian market.

In other news, Iran has launched operations at a new 10-million-barrel tank farm in the Bushehr province.