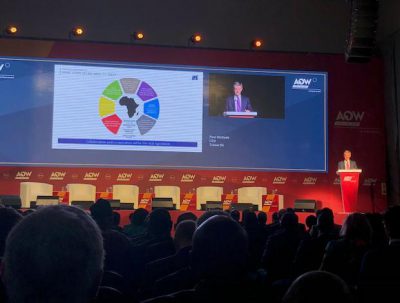 CAPE TOWN, November 8, 2019 – Uganda’s energy minister, Irene Muloni, said this week that Uganda has offered Tullow Oil a way out of a tax dispute that blocked a new oil pipeline.

Muloni made the comments to Reuters at Africa Oil Week, where Tullow CEO Paul McDade had said that Africa risks losing out on investment if it does not “reduce the barriers to investment” rather than adding them. “I think this is something that is still a work in progress,” he said. “We need faster, more efficient decision making to allow us to get on and attract capital, and then invest that capital.”

In August, Tullow tried to sell a 21.57% stake in the Lake Albert development for USD 900 million to its partners Total and CNOOC but failed because the of a tax dispute with the Ugandan authorities.

A final investment decision on the development, which contains 1.5 billion barrels of estimated recoverable reserves, and a pipeline through Tanzania, has been postponed pending resolution of the tax issue.

Operator Tullow owns 33.3% of the play, while CNOOC and Total each have 33.3%.
Africa Oil Week has gathered over 25 ministers from across Africa and executives from the continent’s leading oil companies.